VALERIE NICHOLSON REMEMBERS the room going silent the day she received her diagnosis.

After the doctor told her she had HIV, she was sent to another room to receive her medication, a place that she recalls as “the most scary thing in my life”. And after the initial revelation, she didn’t absorb anything that followed.

“I remember sitting there: I didn’t hear a word she said,” Nicholson recalled in an interview with the Georgia Straight.

It would be another two years before she began taking regular treatment for HIV, a result that she attributes to barriers to accessing information and education about HIV at the time.

“I was literally on my own,” she said. “I fell through the cracks.”

When she did return to seek medical treatment, fearing a lecture, her doctor simply told her: “Valerie, let’s get started.”

“There was no ‘Why haven’t you been here in two years?’ ” Nicholson noted. “I was really near death, and she saved my life.”

Nicholson, an aboriginal woman, has since devoted her time to working with others facing similar barriers, and is currently helping to recruit and survey HIV–positive women as part of a study of the factors that can keep them from accessing care.

The Canadian HIV Women’s Sexual and Reproductive Health Cohort Study (CHIWOS) is the country’s largest multi-site, longitudinal, community-based research study focusing solely on women living with HIV. Researchers will recruit and enroll over 1,250 HIV-positive women living in Ontario, Quebec, and British Columbia. The study is being launched at the start of Women’s Health Awareness Month.

“The increasing burden of HIV/AIDS on Canada’s female population is concerning,” said Dr. Angela Kaida, an assistant professor at Simon Fraser University and CHIWOS co-principal investigator leading the study in BC. “There is a clear and long overdue need for research that acknowledges and addresses the gendered barriers to HIV treatment and care for Canadian women. The results of this study will show where further efforts are needed to maximize the beneficial effects of available interventions and ensure these trends are reversed.”

Research has demonstrated that women face greater biological susceptibility to HIV, in addition to increased vulnerability due to social factors such as poverty, marginalization, violence, and gender inequity. CHIWOS investigators expect the study will yield critical information which will help to fill knowledge gaps about women, HIV, and HIV/AIDS care, and will enable improvements in the health, care, and well-being of women living with HIV in Canada.

“This study is giving a voice to women who previously had no voice,” said Valerie Nicholson, an HIV-positive woman and CHIWOS peer research associate. “My hope is this research will ensure the women in my community, and our children and grandchildren, don’t have to face the same barriers to care I have experienced in my lifetime.”

CHIWOS study participants will complete a questionnaire with a trained peer interviewer, with a follow-up interview 18-months later. Interviews will take place at clinics, AIDS service organizations, and other community-based organizations across the three study provinces.

For more information about the survey and CHIWOS, please visit www.chiwos.ca.

About the British Columbia Centre for Excellence in HIV/AIDS
The BC Centre for Excellence in HIV/AIDS (BC-CfE) is Canada’s largest HIV/AIDS research, treatment and education facility and is internationally recognized as an innovative world leader in combating HIV/AIDS and related diseases. BC-CfE is based at St. Paul’s Hospital, Providence Health Care, a teaching hospital of the University of British Columbia. The BC-CfE works in close collaboration with key provincial stakeholders, including health authorities, health care providers, academics from other institutions, and the community to decrease the health burden of HIV and AIDS. By developing, monitoring and disseminating comprehensive research and treatment programs for HIV and related illnesses, the BC-CfE helps improve the health of British Columbians living with HIV.

For additional information or to request interviews, please contact: 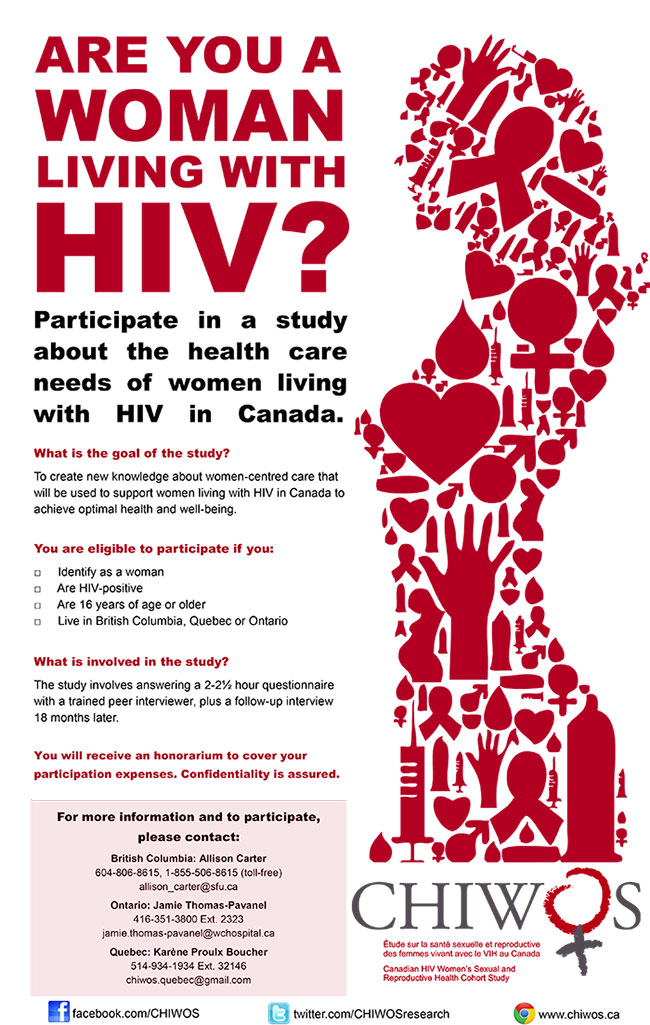