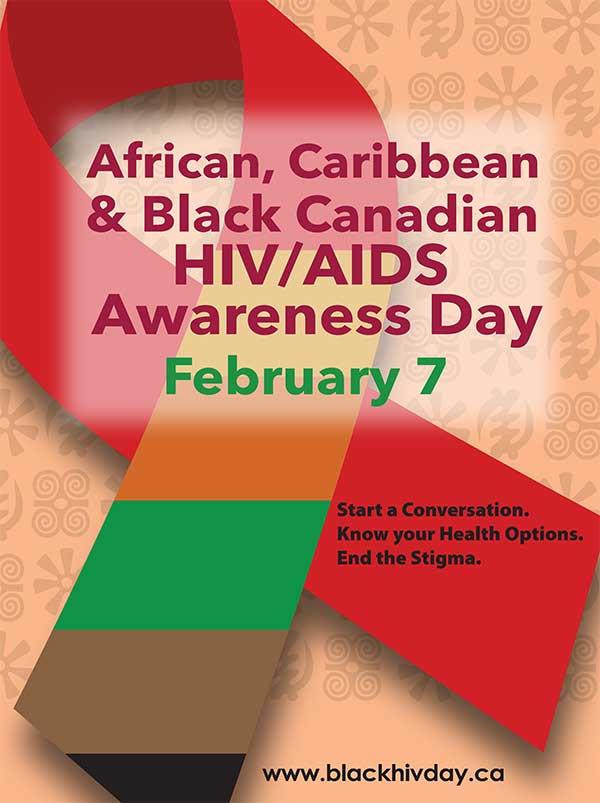 Today, February 7th, is the eighth annual African, Caribbean and Black Canadian HIV/AIDS Awareness Day. This commemorative day helps raise awareness of the impact of HIV/AIDS within Canada’s ACB communities and is also an opportunity to combat HIV-related stigma and fear.

Canada’s marking of this day was inspired by the National Black HIV/AIDS Awareness Day observed in the U.S. since 1999.

Stigma surrounding HIV is a significant barrier to HIV prevention in ACB communities. Due to fears of the virus, members may avoid HIV testing, or, if they have been tested and are living with HIV, these fears may prevent them from seeking the necessary treatment, care, and support they deserve.

Canada’s African, Caribbean, and Black communities are disproportionately affected by HIV/AIDS. Factors contributing to this increased vulnerability to HIV include the experiences and impact of racism, mistrust in the health care system, and discrimination based on gender, sexual orientation, and socio-economic status.

The BC-CfE-created Treatment as Prevention (TasP) strategy acknowledges the importance of addressing social and economic inequities — also known as the social determinants of health. Taking a wholistic view of health, the TasP strategy recognizes the need people have for adequate housing and transportation, employment, and barrier-free access to culturally competent health services in order for them, and their communities, to achieve health and wellness.

For people living with HIV, full adherence to HIV medications leads to an undetectable viral load, which means they are unable to transmit the virus.

African, Caribbean and Black Canadian HIV/AIDS Awareness Day is an opportunity to improve the scope and scale of HIV education and awareness, testing, and treatment among Canada’s ACB communities.

The BC-CfE has had tremendous success in reducing the impact of HIV/AIDS not only in BC, but throughout the world with its TasP strategy. It remains committed to working with Canada’s ACB communities to strengthen their response to HIV, and to support research and teaching to lessen the stigma surrounding the virus and to end the AIDS epidemic globally.