We are in a new era of HIV research and care. We have never known more about the virology of HIV. We also have an array of highly effective antiretroviral therapies which suppress HIV to undetectable levels, while extending the life expectancy of individuals with HIV to close to that of the general population.

These are all significant signs of progress; however, the legacy from the height of the HIV epidemic remains today through another complex and multifaceted healthcare challenge.

The average age of a person living with HIV in Canada is now over 50 years old and this is projected to rise above 65 in the next 10 years. While this is a positive indication of the impact of highly active antiretroviral therapy (HAART) and Treatment as Prevention® in significantly reducing new cases of HIV, this aging population presents with age-related diseases sooner and more frequently than the general population. This includes cardiovascular and metabolic conditions, as well as cognitive impairment and frailty, among others. Little is understood about why this is the case.

The BC Centre for Excellence in HIV/AIDS (BC-CfE) is playing an active role in research to better understand this population’s distinct physiological and psychosocial challenges. Over the last 10 years, BC-CfE researchers have participated in a series of long-term investigations to look more closely at the lifestyle and health factors associated with aging with HIV.

Positive Brain Health Now is one such study. Since 2013, the BC-CfE has participated in this long-term investigation funded by the Canadian Institutes of Health Research (CIHR) with the support of the Canadian HIV Trials Network (CTN).

Led by investigators at McGill University, Positive Brain Health Now researchers are focused on better understanding HIV-related ‘brain health’ factors and how these impact patient outcomes. This includes general cognitive processes such as concentration and memory, mental health and quality of life. By carefully tracking 856 adults living with HIV over time, researchers hope to understand the risk factors associated with declining brain health. 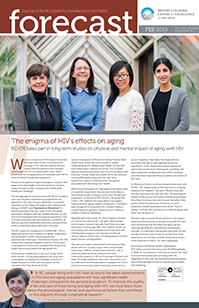 While those living with HIV may experience higher rates of cognitive impairment, they are also more likely to show physical signs of aging sooner than the general population. In the fall of 2019, the BC-CfE joined the CIHR-CTN CHANGE HIV study which investigates frailty and other aging-related conditions in Canadians over the age of 65 living with HIV. The term frailty is commonplace in geriatric medicine and is used as a marker of physical wellbeing.

Speaking about this study, Dr. Silvia Guillemi, Director of Clinical Education at BC-CfE said, “Many studies look at aging, however typically they follow younger populations as they age. With the CHANGE study, we are looking at an older population from the start and charting their progress over five years looking at various aspects of their lives, including physical activity levels, trauma, among others.”

The care and support received at home among older adults with HIV can also impact their overall health outcomes. THRIVE, a study based at the BC-CfE, is exploring experiences accessing home and community supports in BC for those aged 50 years and older. Through qualitative interviews, researchers aim to understand how this population navigates the home and community care system and using novel “service access mapping” interviews, this study will also document the day-to-day experiences of this population - from where they fill prescriptions to where they access food. Participants’ narratives will help researchers understand how shifts in funding priorities have impacted the accessibility and nature of this care.

Dr. Marianne Harris is a clinical research physician with the BC-CfE. Speaking about the importance of aging studies in HIV research, she said, “People living with HIV are now living into their 50s, 60s, 70s and beyond thanks to the success of modern antiretroviral therapy. Now they’re facing a new set of issues that affect their quality of life including loss of memory, muscle weakness, breathing problems and so on. They’re asking, ‘Is this an HIV outcome or is it natural aging, and what can I do about it?’

“The best way to answer these questions is to study a large and diverse group of people living with HIV over time and look at how the effects of aging can be impacted by different interventions and lifestyle changes. It’s important that people living with HIV are actively involved in this research to share their lived experiences and to help us better understand what’s most important to them,” Dr. Harris explained.

According to the World Health Organization 37.9 million people were living with HIV/AIDS globally in 2018. As cure research continues to evolve, we need to ensure that people who are living with HIV, regardless of their age, are empowered and equipped with the knowledge of how to maintain good health and wellbeing. 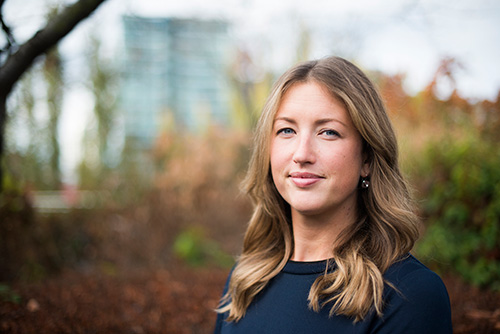 Kate is a Research Scientist with the Epidemiology and Population Health program. Her program of research focuses on health care engagement and health outcomes among people living with HIV and hepatitis C. She completed her PhD in health sciences from Simon Fraser University in 2017 and her scope of expertise includes reproductive health, HIV/AIDS, viral hepatitis, and health systems research. Kate is passionate about conducting clinical and epidemiologic studies that engages with community and helps to inform clinical practice and improve health service delivery. 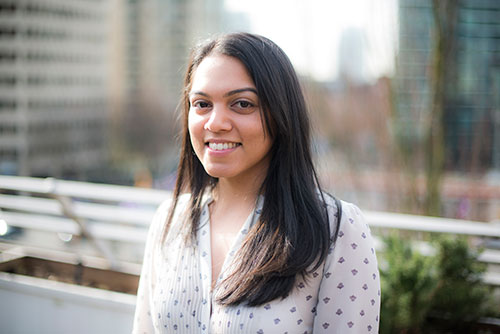 Surita Parashar coordinates "At Home At Howe Street, an evaluation of a supportive housing intervention for people living with HIV." This prospective cohort study, conducted in partnership with McLaren Housing Society of BC and funded through a CIHR Population Health Intervention Research grant, investigates the impact of a supportive housing complex on the health of individuals and families affected by HIV.

This study stemmed from Surita's doctoral research at Simon Fraser University's Faculty of Health Sciences, a community based initiative entitled, “The way I see it: a photographic exploration of housing and health among persons living with HIV in Vancouver.” Surita contributes to a number of other studies within the Division of Epidemiology and Population Health including the Dr. Peter Study, the Engage Study and the Longitudinal Investigations into Supportive and Ancillary Health Services (LISA) project.

Viviane Dias Lima is an Assistant Professor in the Department of Medicine, University of British Columbia and joined the British Columbia Centre for Excellence in HIV/AIDS in 2006 as a Research Scientist and Senior Statistician.  She works closely with Dr. Julio Montaner and Dr. Robert Hogg. She also has several ongoing collaborations with researchers across Canada, the US, Australia and Europe. She also supervises and guides a group of statisticians and data analysts.

In 2007, she joined the modeling group at the Interdisciplinary Research in the Mathematical and Computational Sciences (IRMACS) centre at the Simon Fraser University.

Dr. Viviane Dias Lima is a recipient of two research fellowships by the Canadian Institutes of Health Research and by the Michael Smith Foundation for Health Research to identify and assess the effectiveness of competing treatment-management interventions to improve adherence over a person’s treatment history in order to prevent or reduce disease progression.

Through my ongoing national and international collaborations and my research grants, I plan to create a unique three-branch based on different analytical approaches, including:

2. Disease mapping methods to analyse spatio-temporal trends in disease morbidity and mortality; and

This program will definitely create great research opportunities and it will provide a new setting in BC where trainees will be supported across a variety of disciplinary and methodological backgrounds, further enhancing BC’s competitive advantage in population-health research.

To this end, I currently have research funds to support graduate students interested in working in the research areas mentioned above.

I am situated at the British Columbia Centre for Excellence in HIV/AIDS which is a great environment to conduct research and study. I also have an elective on Clinical Epidemiology in which undergraduate medical students can experience research in the aforementioned areas. 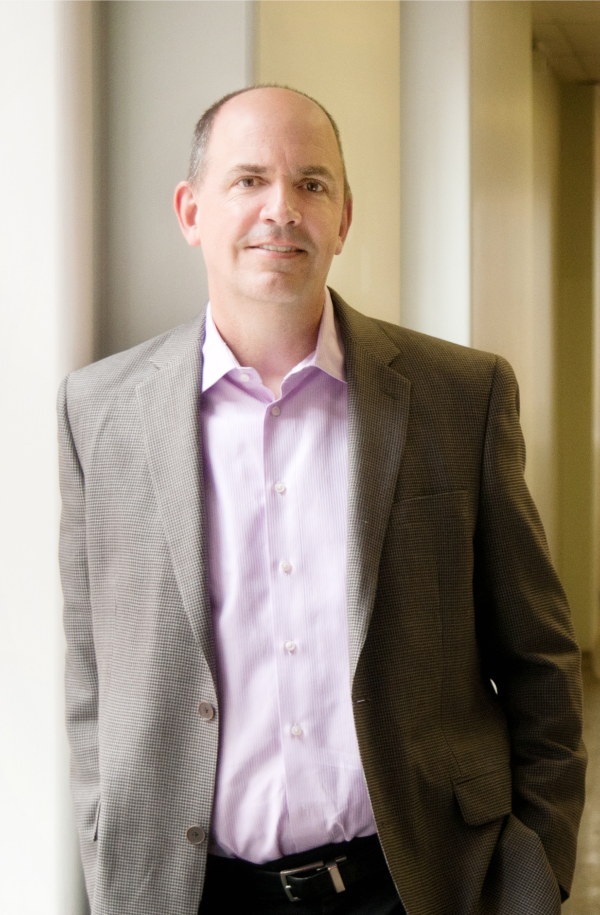 Robert Hogg is a Professor in the Faculty of Health Sciences at Simon Fraser University and Senior Research Scientist at the BC Centre for Excellence in HIV/AIDS. His academic training includes graduate degrees in Anthropology from the University of Victoria (Victoria, BC, Canada) and in Demography from the Australian National University (Canberra, ACT, Australia). Dr. Hogg’s research program strives to evaluate the following:

In sum, Hogg has developed three independent lines of research that uniquely integrate anthropology, demography and epidemiology. Hogg hopes his work will continue to positively impact those living with HIV in Canada and elsewhere.

Dr. Marianne Harris is the Clinical Research Advisor in the AIDS Research Program, a collaboration between St. Paul's Hospital and UBC. Her primary research interests include HIV clinical trials and complications of antiretroviral therapy.