Radical plan to save millions from Aids 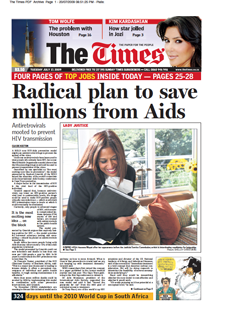 A bold new HIV-Aids prevention model might use antiretroviral drugs to prevent the spread of the virus.

Until now antiretrovirals have been used to treat people who already have HIV, but a new World Health Organisation model shows that the life-extending drugs could well be used to prevent transmission of the virus.

Described by one specialist as “the most exciting new idea in prevention”, the model presented by Reuben Granich of the WHO seized the attention of the world’s scientists at the International Aids Society conference in Cape Town yesterday.

A major factor in the transmission of HIV is the viral load of the HIV-positive individual.

Granich argued that, because antiretrovirals can lower an HIV-positive person’s viral load to undetectable levels, the drugs could be used to make HIV-positive people virtually non-infectious — which could slash HIV transmission rates to levels at which it could eventually be eliminated.

Currently, only people in advanced stages of HIV, with severely compromised immune systems (CD4 counts of 250 and below), are treated with antiretrovirals in the public health system.

The model presented by Granich argues that anybody testing positive for HIV — the model provides for universal voluntary testing and counselling — should be placed on antiretrovirals immediately.

South Africa has more people living with Aids than any other country: 11% of the adult population is infected.

The model presented by Granich could cut new infections and deaths to less than one case per 1 000 people a year by 2016. In 50 years it could reduce the HIV prevalence rate to less than 1%.

Dr Francois Venter, president of the HIV Clinicians’ Society of Southern Africa, said: “This is a major new theme and is leading to intense debate. It offers a convenient convergence of individual and public health benefits. A rough costing demonstrates it is affordable.”

More than seven million deaths could be averted by 2050 by implementing this model in combination with other prevention interventions, said Granich.

“In November [WHO] stakeholders are meeting to discuss this technical model and a pathway on how to move forward. What is clear is that prevention is crucial and we are not keeping up with treatment demands,” Granich said.

WHO researchers first raised the concept in a paper published in the Lancet medical journal late last year. The Cape Town gathering is the first big conference to debate it.

Dr Julio Montaner, president of the International Aids Society, supported the new model and said it had “moved the goalposts far out” from the 2001 goal of universal access to treatment.

Dr Tony Fauci, one of the world’s top HIV scientists and director of the US National Institute of Allergy and Infectious Diseases, said of the new model: “Immediate treatment is a bold concept that deserves serious consideration. We will be doing research to determine the feasibility of several assumptions underlying it.”

Fauci said they would be researching whether the new model is cost-effective and whether it would work.

“It’s worth pursuing as it has potential at a conceptual level,” he said.

Only about a third of the 9 million people who need treatment receive the life-saving drugs at present.

Venter said there were clear benefits to taking antiretrovirals wh e n the CD4 count was higher “but the reality is we largely diagnose people when they are already very sick and most South Africans start with a very low CD4 count.”

Nevertheless, he said: “It is the most exciting new idea in prevention on the block. The questions are whether it will work, and increasingly it seems it could.”

Granich’s model was not the only prevention intervention making waves at the conference.

Yesterday, South Africa launched a clinical trial of the first South African-designed Aids vaccine, which will be tested at five sites locally and in the US.

The US arm of the trial has 12 participants while the South African arm plans to recruit 36 participants from two sites, one in Western Cape and another in Gauteng.

“If data from this clinical trial are promising, we intend to move into the next phase of trials, which will involve about 200 participants, and will look at further safety and immunogenicity data,” said Professor Glenda Gray, lead clinical investigator of the South African clinical trials team.