Women and the Criminalization of HIV Non-Disclosure

Sensational headlines entice readers but too often tell an incomplete story that only serves to perpetuate negative stereotypes. This is frequently the case when people living with HIV navigate the criminal justice system in HIV non-disclosure cases only to see their faces splashed across media channels, adding to the public fear and stigma associated with HIV/AIDS. Most prosecutions are against men, but for women living with HIV, the very justice system that was set up to protect women by criminalizing HIV non-disclosure is further victimizing them.

A new Canadian Institutes for Health Reasearch-funded grant, Women, HIV and the Law Project (Co-PIs: Drs. Krüsi, Shannon) will build on the BC-CfE’s Gender & Sexual Health Initiative’s work with SHAWNA Project (Sexual Health and HIV/AIDS: Women’s Longitudinal Needs Assessment), in partnership with the Positive Women’s Network (Lead: Marcie Summers) and the Canadian HIV/AIDS Legal Network (Leads: Alison Symington, Cécile Kazatchkine). The partnership aims to review global evi dence, gaps in policy and practice, and inform research focused on the impacts of the criminalization of HIV on women’s lived experiences of disclosing their HIV status in the context of intimate relationships and barriers to accessing care and support services.

“There is grave concern that the current criminalization of HIV is having significant negative impacts on the daily lives of women living with HIV,” says Dr. Krüsi, postdoctoral fellow with GSHI and UBC. “More empirical evidence is urgently needed, to support community and legal efforts to address this human rights concern.” 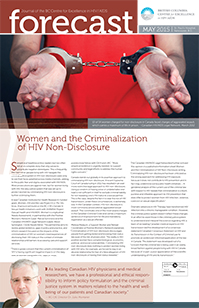 Canada stands out globally in its assertive approach to criminalizing HIV non-disclosure. A recent Supreme Court of Canada ruling in 2012 has resulted in an ever more restrictive legal approach to HIV non-disclosure. Using a condom or having a low or undetectable viral load is not sufficient in itself to exclude criminal liability for not revealing one’s HIV status to a sexual partner. This is the case, despite the fact it is clear the risk of HIV transmission, under these circumstances, is extremely low. In the Canadian context, HIV non-disclosure is most commonly prosecuted as aggravated sexual assault. This constitutes one of the most severe charges in the Canadian Criminal Code and carries a maximum sentence of imprisonment for life and mandatory registration as a sexual offender.

Melissa Medjuck, a Support Worker and Retreat Coordinator at Positive Women’s Network explained, “Criminalization of HIV non-disclosure discourages people from getting tested and knowing their status because of the risk of prosecution. The reality is HIVpositive women face complex biological, economic, political, and social vulnerabilities. Criminalizing HIV non-disclosure does nothing to protect women living with HIV who, for example, are forced to stay in an abusive relationship for fear of a false allegation of HIV non-disclosure or having their status revealed.”

The Canadian HIV/AIDS Legal Networked further echoed this opinion in a published information sheet Women and the Criminalization of HIV Non-Disclosure writing, “Criminalizing HIV non-disclosure has been criticized as the wrong approach for addressing HIV exposure because it does not contribute to HIV prevention and in fact may undermine some public health initiatives … A gendered analysis of the current use of the criminal law with respect to HIV reveals that criminalization is a blunt, punitive and inflexible approach to HIV prevention that does little to protect women from HIV infection, violence, coercion or sexual objectification.”

Dramatic advances in HIV Therapy have transformed HIV infection into a chronic manageable condition. However, the criminal justice system doesn’t reflect these changes. In an effort to assist those in the criminal justice system to understand and interpret the science regarding HIV, a team of six leading Canadian medical experts on HIV transmission led the development of a consensus statement Canadian Consensus Statement on HIV and its Transmission in the Context of Criminal Law to promote an evidenced-informed application of the law in Canada. The statement was developed out of a “concern that the criminal law is being used in an overly broad fashion against people living with HIV in Canada because of, in part, a poor appreciation of the scientific understanding of HIV and its transmission.”