According to health officials, Panama’s embrace of Treatment as Prevention® (TasP® ) since 2014 has resulted in quicker diagnosis, as well as accelerating the linkage of patients to antiretroviral therapy (ART) clinics. The country’s HIV diagnoses curve has stabilized in recent years and officials expect it will decrease in the coming years.

“We have achieved better adherence and there has been an increase in the percentage of patients with undetectable viral loads,” says Dr. Aurelio Núñez Maitín, Head of the STI, HIV and Viral Hepatitis National Program in Panama. “The incorporation of the BC-CfE’s TasP® strategy in Panama has permitted the decentralization of CD4 counts and pVL tests in the country and the incorporation of a new algorithm for diagnosing HIV. These helped facilitate the beginning of the 90-90-90 strategy in the country.”

In addition to widespread HIV testing and immediate access to highly active antiretroviral therapy (HAART) for people living with HIV, the Ministry of Health is initiating a program titled “RAPID”. This will focus on initiating patients into treatment immediately after diagnosis and on decentralizing services for people living with HIV so that they can receive treatment from general physicians and family doctors. Panama is increasing support for vulnerable groups such as MSM (men who have sex with men), women and transgender populations to encourage treatment adherence.

The BC-CfE and Panama’s health authorities jointly developed research and HIV initiatives and created an HIV fellowship program allowing Panamanian HIV scientists to work with BC-CfE researchers and clinicians in Vancouver. During this time, the BC-CfE trained lab staff and students and provided science and support in the development and evaluation of Panama’s TasP® strategy. The BC-CfE trained master’s students and developed research on the cost-effectiveness of TasP® while also processing lab samples for HIV drug resistance. 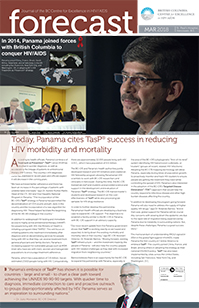 In order to further develop the partnership, Panamanian health officials are developing a business case to expand BC-CfE support. The objective is to establish a facility similar to the BC-CfE in Panama, with BC-CfE support in an advisory capacity.

“Our most recent update from the Panama government shows that TasP® is working exactly as we hoped and expected, to bring down the existing morbidity and mortality rates in that country,” says BC-CfE Assistant Director, Dr. Rolando Barrios. “Moving forward, existing TasP® infrastructure – and the investment made by the people of Panama - will also help the country grapple with HIV-related challenges as they deal with increased migration from neighboring countries.”

Barrios believes there is an opportunity for the BC-CfE to expand the partnership with Panama, especially in the area of the BC-CfE’s phylogenetic “first-of-its-kind” system identifying HIV transmission outbreaks, or “clusters” (groups of recent, related, HIV infections). Adopting the BC-CfE mapping technology will allow Panama, especially during times of population growth, to proactively monitor and track HIV clusters to ensure people are getting the treatment they need while controlling the spread of HIV. Panama is also interested in the adoption of the BC-CfE’s Targeted Disease Elimination™ (TDE™) approach that would help the country respond to infectious disease and other high burden diseases affecting the country.

“In addition to developing the program going forward, Panama will also need to address the supply of higher quality HIV drugs,” says Dr. Rolando Barrios. “And in that case, global support for Panama will be crucial. Any concerns with slowing down the epidemic are due to the rapid rate of migration being experienced by Panama due to instability in surrounding nations. But, despite these challenges, Panama is a great success story.”

The memorandum of understanding (MOU) signed in 2014 in the global fight against HIV/AIDS, made Panama the first country in Central America to embrace TasP®. The country joined China, France, and Brazil, among others in adopting the strategy as their national HIV/AIDS policy. TasP® has also been implemented by cities across the United States, including San Francisco, New York City, and Washington, D.C.