BC-CfE acted as intervener in case that is a critical step towards promoting health and safety, improving HIV prevention

The Supreme Court of Canada has struck down the country’s anti-prostitution laws in a unanimous decision delivered on Dec. 20.

The case of Canada (Attorney General) v. Bedford was initiated in 2007 by three Ontario sex workers: Terri Jean Bedford, Amy Lebovitch, and Valerie Scott. While the exchange of sex for money or goods is not illegal in Canada, the court’s decision struck down three key provisions in the Criminal Code that make communicating for the purposes of prostitution, bawdy houses, and living off the avails of prostitute all illegal.

The decision upholds sex workers’ human rights to work and to health by acknowledging the ways in which criminalization contributes to unsafe working conditions for sex workers.

“The prohibitions at issue do not merely impose conditions on how prostitutes operate,” wrote Chief Justice Beverley McLachlin in the decion. “They go a critical step further, by imposing dangerous conditions on prostitution; they prevent people engaged in a risky—but legal—activity from taking steps to protect themselves from the risk.”

Last June, the court heard from a coalition comprising the BC Centre for Excellence in HIV/AIDS (BC-CfE), Canadian HIV/AIDS Legal Network (Legal Network), and the HIV & AIDS Legal Clinic Ontario (HALCO). The co-interveners contributed evidence drawn from years of research and dozens of peer-reviewed publications that resulted largely from two major research projects led by the BC-CfE’s Gender and Sexual Health Initiative (GSHI): AESHA (An Evaluation of Sex Workers Health Access), a longitudinal cohort of street and off-street sex workers, and the Ethnographic-Qualitative Project of the HIV Risk Environment, which studies the physical, social and policy features of the work environment. 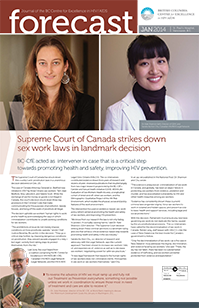 The intervention focused on evidence-based, sex-work policy reform aimed at promoting the health and safety of sex workers, and improving HIV prevention.

“We know from our research the law is not only failing to protect, it’s actually causing harms,” said Dr. Kate Shannon, GSHI director. “The Supreme Court decision striking down these criminal sanctions is a landmark ruling and one that will be a critical evidence-based step towards promoting health and safety in the sex industry.”

Sandra Ka Hon Chu, co-director of research and advocacy with the Legal Network, says the current approach “has been shown to increase sex workers’ risks of, and experiences of, violence as well as to decrease sex workers’ negotiating power for safer sex practices.”

“A new legal framework that respects the human rights of sex workers does not criminalize clients, third parties in sex work or sex workers themselves,” said Chu

In an op-ed published in the National Post, Dr. Shannon and Chu wrote:

“The science is unequivocal: criminalization of sex work in Canada, and globally, has been an abject failure in protecting sex workers from violence, predation and murder, and has exacerbated vulnerability to HIV and other health inequities among sex workers.

With this decision, Parliament must ensure any new laws governing sex work do not replicate the harms caused by the unconstitutional provisions. The co-interveners have called for the decriminalization of sex work in Canada. Renée Lang, staff lawyer with HALCO, cites the case of New Zealand as the best model for Canada’s government to follow.

“Only the decriminalization of sex work—as is the case in New Zealand—truly addresses the stigma, discrimination, and violence faced by sex workers,” she said. “There, the sky has not fallen, there has been no substantiated evidence of trafficking, and sex workers are better protected from violence and exploitation.”

“To reverse the advance of HIV we must ramp up and fully roll out Treatment as Prevention everywhere, something not possible unless we work in coordination to ensure those most in need of treatment and care are able to receive it.” - Dr. Julio Montaner, director of the BC-CfE, at World Bank meeting to discuss the Millennium Development Goals this January in Washington, D.C.