Support from the Vatican, formalization of an agreement with the Joint United Nations Programme on HIV/AIDS (UNAIDS), and a Memorandum of Understanding (MOU) signed by Panama highlight the growing support base for the strategy pioneered by BC Centre for Excellence in HIV/AIDS (BC-CfE).

At the opening of a Caritas Internationalis and UNAIDS co-organized consultation at the Vatican in Rome last month, Archbishop Zygmunt Zimowski favoured expanding access to HIV treatment worldwide. Speaking to an audience of international HIV/AIDS researchers and policymakers, the archbishop called for the implementation of Treatment 2015, the framework developed by UNAIDS to expand access to life-saving HIV treatment to 15 million people living with the disease. 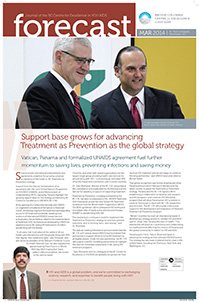 “In all cases, (we must) place at the centre of all our health care interventions with the people (living with HIV), their dignity, their needs and rights,” said Zimowski, who also serves as president of the Vatican’s Pontifical Council for Health Pastoral Care. He later repeated the appeal made by Pope Francis on World AIDS Day 2013, hoping that “every patient, without exception, has access to the care he needs.”

Churches and other faith-based organizations are the largest single group providing health care services for people living with HIV—contributing an estimated 50% of facility-based and community care in some countries.

Dr. Julio Montaner, director of the BC-CfE, presented at the consultation and applauded the Archbishop and the Vatican for speaking in support of expanding treatment.

Treatment as Prevention, a strategy pioneered by the BC-CfE, has been incorporated in the UNAIDS Treatment 2015 framework as well the new Global HIV Treatment Guidelines from the World Health Organization (WHO). The WHO guidelines call for widespread HIV testing and immediate offer of highly active antiretroviral therapy (HAART) to people living with HIV.

“The momentum continues to build to implement the Treatment as Prevention strategy to save lives, prevent infections, and, in the long-term, save money,” said Dr. Montaner.

The Vatican meeting followed an announcement that the BC-CfE and Geneva-based UNAIDS had formalized their partnership to support efforts to bring HIV treatment to all eligible people. Under the new partnership, the BC-CfE will support scientific modelling and activities to highlight the need for immediate investments in life-saving HIV treatment programs.

“Julio Montaner and his colleagues at the BC Centre for Excellence in HIV/AIDS are globally recognized for their work on HIV treatment and we are happy to continue this long partnership,” said UNAIDS executive director Michel Sidibé.

That global recognition was further emphasized when Panama announced in February it had become the latest country to adopt the reatment as Prevention strategy. Panama and the BC-CfE signed a MOU establishing a collaboration to develop new research and HIV programs, and create an HIV fellowship program that will allow Panamanian HIV scientists to come to Vancouver to work with BC-CfE researchers and clinicians. The BC-CfE will provide science and support in the development and evaluation of Panama’s Treatment as Prevention program.

“British Columbia has been an international leader in developing a strategy proven to combat HIV and AIDS,” said Dr. Javier Díaz, Panama Minister of Health. “This partnership will assist us in promoting and collaborating on health priorities affecting the citizens of Panama and the global community in relation to HIV and AIDS.”

Panama joins China, France, Brazil, and Spain in adopting the strategy as their national HIV/AIDS policy. The strategy has also been implemented by cities in the United States, including San Francisco, New York City, and Washington, D.C.