Spring ARV Update: Publicly-funded PrEP off to strong start in BC

An HIV prevention program, available at no cost to people at high risk of HIV, is enrolling over 400 participants – primarily men who have sex with men (MSM) – every month right across BC. PrEP (pre-exposure prophylaxis) is a daily oral antiretroviral medication that prevents new HIV infection when taken consistently.

"Treatment as Prevention® has worked remarkably well here at home and around the world to bring down the rate of new HIV infections; however, we see a persistent rate of ongoing transmissions among MSM," says Dr. Julio Montaner, Director of the BC Centre for Excellence in HIV/AIDS (BC-CfE). "Our research shows PrEP will drastically reduce new cases of HIV in BC."

Since it's official rollout in January of 2018, over 1,500 people have enrolled in the publicly funded PrEP program across BC. The median age of enrollees is 34 and 99% of them are male. Approximately 30% have accessed PrEP before while a larger number (70%) are new to the program.

Junine Toy, Senior Manager of the BC-CfE Drug Treatment Program (DTP), expected to see a small number of prescribers join the PrEP program initially and was surprised by the results. One of the foundational programs of the BC-CfE, the DTP is funded by the provincial government (PharmaCare) to distribute anti-HIV drugs based on guidelines generated by the Therapeutic Guidelines Committee.

"We thought we would only get a small number of prescribers with a high number of patients, but we have seen over 300 prescribers across the province, many with only one or two PrEP clients," says Toy. "This is truly heartening because it tells us people in BC are having important conversations with their family doctors about their health, preventatively and proactively." 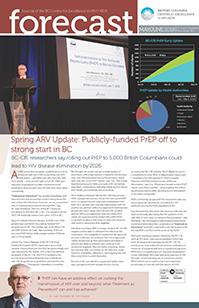 Most eligible individuals fall into the following groups — MSM, transgender women, those who have used NPEP (non-occupational post-exposure prophylaxis) more than once, people with ongoing relationships with HIV positive sex partners without a suppressed viral load and people who inject drugs with a known HIV-positive partner without a suppressed viral load. Many PrEP clients are assessed and provided with a HIRI-MSM score (HIV Incidence Risk Index for men who have sex with men) to determine their eligibility.

Enrollees must have MSP coverage, reside in BC, be HIV-negative and be able to withstand the effects of the medication. Once eligibility is established, the approval process is efficient, according to Toy. Once approved, clients should pick up their prescription promptly to prevent any delay in initiation and continue to be monitored regularly. After the initial screening, clients are checked after one month for HIV infection, renal function, tolerability, adherence, and ongoing risk, and then every three months thereafter.

"Doctors in BC can submit a request and within a few days, get approved and navigate the process by accessing the BC-CfE website, RACE (Rapid Access to Consultative Access), REACH (Rapid Expert Advice and Consultation for HIV) and the St. Paul's Hospital Pharmacy PrEP phonelines for any additional information," says Toy. "Physicians should monitor PrEP clients every three months – tying together the follow-up and prescription refills, allowing doctor and patient to reconnect frequently."

MSM community groups and HIV researchers alike see the program as a pivotal part of ending the HIV epidemic among the MSM population in BC.

"Gay, bisexual and other men who have sex with men are disproportionally affected by the HIV epidemic in BC, with 46% of new cases occurring in this population," says Montaner. "We developed a mathematical transmission model and determined the combination of Treatment as Prevention® and PrEP could lead to HIV elimination in BC among MSM over the next ten years (or by 2026)."

PrEP joins existing programs offered by the BC-CfE such as PEP (post-exposure prophylaxis) which has been developed and managed by the BC-CfE for twenty years. It provides HIV prevention medication in instances of sexual assault and occupational exposure. NPEP (non-occupational post-exposure prophylaxis) covers individuals who may have been exposed to HIV through consensual drug use or sexual encounters. NPEP started out as a pilot project and expanded provincially to coincide with the launch of PrEP.