International leaders discuss the importance of new HIV treatment targets during the roundtable discussion at the opening of the International HIV Treatment as Prevention Workshop in Vancouver.

Hundreds of leading HIV scientists from around the world gathered in Vancouver this April to share the results of their latest research on HIV prevention at the 4th International HIV Treatment as Prevention Workshop.

Previous workshops have focused on whether expanding treatment access is the most effective strategy to fight the global epidemic of HIV and AIDS. At this year’s workshop, researchers were ready to discuss best approaches to implementing the strategy.

“Finally there is a consensus emerging that the science clearly demonstrates treatment is highly effective in stopping transmission in all contexts,” said Dr. Julio Montaner, director of the BC Centre for Excellence in HIV/AIDS (BC-CfE) and co-chair of the workshop. He argued for being more efficient by identifying who should be treated and when.

Specifically, vulnerable populations such as women, children, and men who have sex with men remain at-risk as a result of ongoing discrimination in many countries, limiting their access to life-saving treatment and care. 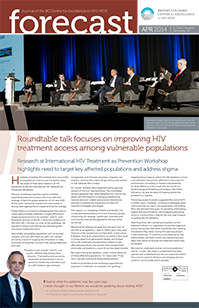 Dr. Loures’ remarks were made during the opening session of the four-day workshop. The roundtable session gathered high-level delegates from across the globe with the intention of bringing together key national decision-makers and pivotal international partners to explore the importance of new HIV treatment strategies and targets.

The session, co-hosted by UNAIDS and the BC-CfE, comprised representatives from the three key groups influencing HIV strategy—politicians, scientists and community—and set the agenda for the rest of the workshop.

“We should be setting one goal, and one goal only: to end HIV as an epidemic,” said Dr. Mark Dybul, Executive Director of the Global Fund to Fight AIDS, Tuberculosis & Malaria. During his presentation, he spoke of the need to move away from generalized targets and instead focus HIV treatment and prevention efforts on key affected populations, the people most marginalized and made vulnerable as a result of societal determinants.

“We have to bring the epidemic under control within all of these affected populations,” Dr. Dybul said. “If we don’t, we will continue to leave people behind.”

Evidence presented at the workshop supported his argument. In Vietnam, for example, hot spotting—targeting those regions where the HIV epidemic is most concentrated—has proven effective in reducing HIV transmission, according to research presented by Dr. Brian Williams of the South African Centre for Epidemiological Modelling and Analysis (SACEMA). Efficiency, he said, dictates HIV testing where the prevalence is highest.

Promising research results suggested the end of AIDS is within reach. However, conference delegates were cautioned that success is not guaranteed, and ending AIDS will demand new ways of operating. Eliminating stigma and discrimination—and engaging and giving voice to communities—may be the only way forward to ending the HIV epidemic.

Reaching those who are being missed by current treatment efforts is in opposition to punitive legal and policy frameworks that deter individuals from seeking the services they need. During the opening session, it was noted that 77 countries criminalize same-sex relationships, and that children are substantially less likely than adults to receive HIV treatment when they are eligible.