Researchers from the BC Centre for Excellence in HIV/AIDS (BC-CfE) released this month a comprehensive report on the drug situation in Vancouver at an event at the Carnegie Community Centre in the city’s Downtown Eastside.

The Drug Situation in Vancouver report, published by the BC-CfE Urban Health Research Initiative (UHRI), compiled 15 years of data examining the ongoing public and individual health-related harms resulting from illicit drug use, including HIV and hepatitis C transmission. It is the second edition of the report, the first was released in 2009.

Community members filled the auditorium to hear the latest findings, which demonstrated health-focused policies have been more effective than federal law enforcement measures at reducing illicit drug use and improving public health and safety.

Dr. Thomas Kerr, report co-author and UHRI co-director, presented detailed research on drug use trends, drug availability, HIV rates, and behaviours among some of the city’s most vulnerable people who use illicit drugs. The research found fewer people using injection drugs, significant decreases in syringe sharing and related HIV and hepatitis C transmissions, an increase in drug cessation, and improved access to addiction treatment. These positive trends were seen despite the unchanged ease of access to and affordability of illicit drugs. 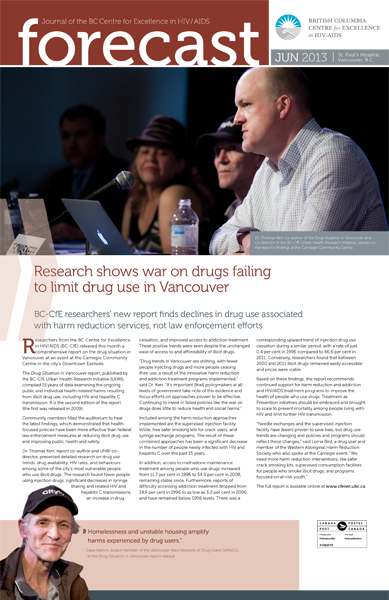 “Drug trends in Vancouver are shifting, with fewer people injecting drugs and more people ceasing their use, a result of the innovative harm reduction and addiction treatment programs implemented,” said Dr. Kerr. “It’s important [that] policymakers at all levels of government take note of this evidence and focus efforts on approaches proven to be effective. Continuing to invest in failed policies like the war on drugs does little to reduce health and social harms.”

Included among the harm reduction approaches implemented are the supervised injection facility InSite, free safer smoking kits for crack users, and syringe exchange programs. The result of these combined approaches has been a significant decrease in the number of people newly infected with HIV and hepatitis C over the past 15 years.

In addition, access to methadone maintenance treatment among people who use drugs increased from 11.7 per cent in 1996 to 54.5 per cent in 2008, remaining stable since. Furthermore, reports of difficulty accessing addiction treatment dropped from 19.9 per cent in 1996 to as low as 3.2 per cent in 2006, and have remained below 1996 levels. There was a corresponding upward trend of injection drug use cessation during a similar period, with a rate of just 0.4 per cent in 1996 compared to 46.6 per cent in 2011. Conversely, researchers found that between 2000 and 2011 illicit drugs remained easily accessible and prices were stable.

Based on these findings, the report recommends continued support for harm reduction and addiction and HIV/AIDS treatment programs to improve the health of people who use drugs. Treatment as Prevention initiatives should be embraced and brought to scale to prevent mortality among people living with HIV and limit further HIV transmission.

“Needle exchanges and the supervised injection facility have [been] proven to save lives, but drug use trends are changing and policies and programs should reflect these changes,” said Lorna Bird, a drug user and member of the Western Aboriginal Harm Reduction Society who also spoke at the Carnegie event. “We need more harm reduction interventions, like safer crack smoking kits, supervised consumption facilities for people who smoke illicit drugs, and programs focused on at-risk youth.”