Recap on the Fall HIV/ARV Update

For over a decade now, health care providers, researchers, scientists, service providers and members of the community have come together twice yearly at the BC Centre for Excellence in HIV/AIDS (BC-CfE) for a day-long conference on the status of HIV and related conditions in BC. On October 22nd, this year’s Fall HIV/ARV Update focused on HIV and syndemic issues of substance use disorders, viral hepatitis and mental health.

In a relatively new BC-CfE initiative, pharmacist Junine Toy shared news on the continued rapid uptake of PrEP (pre-exposure prophylaxis) since becoming publicly available in BC in January. Close to 3,000 British Columbians have been prescribed the HIV prevention drug, with new prescribers coming on each month from across the province. PrEP is a new Government of BC supported initiative in the Treatment as Prevention (TasP) strategy. And, in combination with expanding access to HIV testing and treatment through TasP, will play a role in curbing the HIV epidemic.

As part of the update, the BC-CfE Education and Training Team invited nurse practitioners to access training in order to prescribe PrEP and antiretroviral treatment (ART). This new BC-CfE program, launched this fall in partnership with the College of Registered Nurses of BC (now the British Columbia College of Nursing Professionals), is aiming to increase PrEP and ART prescribers. The goal is to reach individuals living with HIV or at-risk of HIV in underserved areas.

BC-CfE Director Dr. Julio Montaner highlighted the encouraging pace of progress in BC and in Canada towards reaching the UNAIDS 90-90-90 goals to end AIDS by 2030. “AIDS-related deaths are at an all-time low in BC. The challenge is we are seeing increased non-AIDS-related conditions as drivers of mortality,” said Dr. Montaner. “There is an urgent need on our part to expand our strategy to be more attentive to the needs of the patients with mental health and substance use issues.” These factors are pertinent to the BC-CfE’s continued expansion into Vancouver’s Downtown East Side. Two years since a public health emergency was declared, BC Provincial Health Officer Dr. Bonnie Henry reflected on the ongoing opioid overdose crisis in the province. The crisis is being driven by illicit drug use and overdose deaths are predominantly among young men. Indigenous populations are “overwhelmingly overrepresented”. 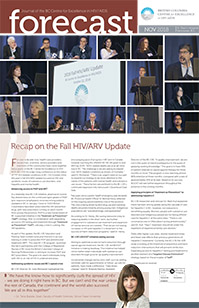 According to Dr. Henry, life-saving naloxone is key to reducing deaths in the short-term, but further engagement in substance use treatment and expansion of mental services are needed. “That we are not seeing increases in HIV and hepatitis C is testament to the success of harm reduction programs,” said Dr. Henry BC-CfE’s BOOST Initiative seeing success

Incremental changes led by clinic staff, such as adding reminder calls for appointments or follow-up calls for patients, have made a difference. “Data drives change,” said Dr. Rolando Barrios, Assistant Director of the BC-CfE. “In quality improvement, we are not in the quest of new knowledge but in the quest of applying existing knowledge.” The goal is to have 95% of patient retained on opioid agonist therapy for three months or more. The program is now reaching almost 80% retention at three months, compared with a rate of approximately 30% at its start. Based on its success, BOOST will see further expansion throughout the province in the coming months.

Applying principles of Treatment as Prevention to addressing hepatitis C

BC-CfE researcher and clinician Dr. Mark Hull explained there has been strong uptake along the cascade of care for hepatitis C in BC; however, not everyone is benefitting equally. Women, people with substance use disorders and Indigenous people are not being offered care for hepatitis C at the same rates. “There is not universal access to DAAs [direct acting antivirals],” said Dr. Hull. “Hep C treatment should fall under the repertoire of experienced family care doctors.”

DAAs offer higher cure rates, shorter treatment times and fewer side effects than previous generations of hepatitis C treatments. Currently, the BC-CfE Per-SVR study is looking at the threshold of prevention and harm reduction interventions that will prevent reinfection. Expanding access to hepatitis C testing and treatment is another element of a Targeted Disease Elimination strategy, based on the principles of TasP.