Phylogenetics: The future of the fight against HIV/AIDS and other targeted diseases

A revolutionary phylogenetic monitoring program developed at the BC Centre for Excellence in HIV/AIDS (BC-CfE) demonstrates how HIV is spreading across five provinces in Canada. This first-of-its-kind system identifies HIV transmission outbreaks, or “clusters” (groups of recent, related, HIV infections) in near real-time.

“HIV does not stop at jurisdictional boundaries. Yet time and time again, we treat it like it does,” says Dr. Jeff Joy, Research Scientist. “And while we can see the value of applying this system to HIV in Canada – the long-term impact of this type of phylogenetic monitoring could be significant with the rise of HIV drug resistance testing in other countries and in monitoring the spread of other infectious diseases.”

The HIV phylogenetic map spanning British Columbia, Alberta, Saskatchewan Ontario and Quebec and developed with the support of the Public Health Agency of Canada, tells the story of Canada’s continuing battle with HIV. While most of the provinces contain large, localized HIV clusters, a full 55 clusters span across three or more provinces - including one cluster involving the five provinces.

Researchers say the way HIV travels makes it clear the variation across the country in HIV treatment needs to be replaced by a consistent, coordinated national effort.

“The federal government’s embrace of the UN 90-90-90 Target, harm reduction, as well as progressive and inclusive attitudes towards the LGBTQ2 community will help move to eliminate HIV in Canada,” says Joy. “We also need to ensure there is equitable access to treatment in hard to reach communities and equal access to antiretroviral treatment. Phylogenetics allows us to make a strong case for this.”

The potential application of this technology does not stop at HIV transmission.

The phylogenetic technology being used by the BC-CfE has evolved from science to implementation to public health benefit, not just for British Columbia, but nationally.  The program is designed to respond to a variety of challenges in the context of different epidemics for any virus or pathogen that evolves rapidly. Researchers plan to apply phylogenetics to examine the spread and containment of Hepatitis C nationally. 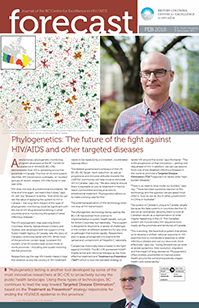 “Canada has historically been a leader in the fight against HIV/AIDS. The BC-CfE pioneered HAART (highly active anti-retroviral therapy) as the most effective treatment and Treatment as Prevention (TasP) which is now the standard strategy to tackle HIV around the world,” says Dr. Julio Montaner, BC-CfE Director. “This is the progression of that innovation – getting one step ahead of HIV. In addition, we can use lessons from one of the deadliest infectious diseases in the world to promote a Targeted Disease Elimination (TDE™) approach to tackle other high-burden diseases.”

“There is no need to stop inside our borders,” says Joy. “There has been a positive reaction to this technology and the question we are asked most often is ‘how do we do this in other jurisdictions? In China or Australia?’”

The system in Canada is unique to Canada, largely because the data systems in countries like the US are not as centralized, allowing them to look at Canadian results as a representation of what maybe happening in the US. The Canadian system will include every HIV sequence from nearly all the provinces and territories of Canada.

“This is exciting. We have built a system that allows us to develop a unified, national response to HIV, examine how to coordinate a response to other infectious disease and use our resources more effectively,” says Joy. “Going forward we can look at global epidemics, their evolution, migration and the impact of drug resistance. Phylogenetics offers endless possibilities to improve public health around the world and positively impact health care sustainability.”