Add Brazil to the growing list of countries to officially embrace the HIV Treatment as Prevention (TasP) strategy.

In October, Brazil joined France as the second country in less than a month to announce plans to adopt the made-in-B.C. concept as their national policy to combat HIV/AIDS.

"The momentum is increasing to implement this strategy, proven to save lives and prevent HIV transmission," said Dr. Julio Montaner, director of the BC Centre for Excellence in HIV/AIDS (BC-CfE). "We applaud Brazil's leadership, and eagerly await similar announcements from other countries. The global adoption of Treatment as Prevention holds the promise of ending HIV and AIDS in our lifetime."

TasP calls for widespread HIV testing and immediate offer of highly active antiretroviral therapy (HAART) to people living with HIV. Evidence has demonstrated treatment can virtually eliminate progression of HIV infection to AIDS and premature death, and simultaneously stop transmission of the virus.

The strategy was first introduced by the BC-CfE in 2006, and endorsed by the Joint United Nations Programme on HIV/AIDS (UNAIDS) in 2010. China became the first nation to embrace the strategy in 2011. The next year, the United States identified TasP as a key strategy to achieve an AIDS-free generation. In July 2013, the World Health Organization fully incorporated TasP in their new Global HIV Treatment Guidelines. 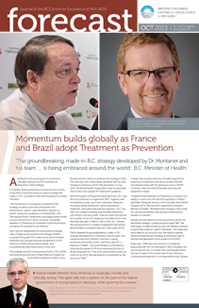 With the support of the provincial government, B.C. was the first jurisdiction to implement TasP. Together with simultaneous scale-up of harm reduction measures – including needle distribution, opioid substitution treatment, and supervised injection services – B.C. has seen HIV-related morbidity and mortality decline by over 90 per cent since 1995. Over the same time period, the number of new HIV diagnoses has fallen from more than 800 per year in 1995 to 238 in 2012. B.C. remains the only province in Canada to implement TasP and to demonstrate a consistent decline in new cases of HIV.

"We're pleased this groundbreaking, made-in-B.C. strategy developed by Dr. Montaner and his team, and implemented here in British Columbia, is being embraced around the world," said Terry Lake, B.C.'s Minister of Health. "Our government is committed to reducing the spread of HIV and improving the lives of those living with HIV. That other governments share our vision for an AIDS-free generation is a testament to the success of TasP."

In Brazil, the country's Ministry of Health expects the expansion of treatment will lead to at least 100,000 new people living with HIV gaining access to HAART. Currently, there are 313,000 people receiving HIV treatment in Brazil.

"Implementing Treatment as Prevention is critical to our ability to control the HIV and AIDS pandemic in Brazil," said Fábio Mesquita, director of the Sexually Transmitted Diseases (STD), AIDS and HIV Department of Brazil's Ministry of Health. "We believe this strategy is the model for care and prevention that will best help bring this disease to its knees."

Despite the international community embracing this HIV elimination strategy, Canada has yet to adopt TasP. "We have a plan, it's been proven to work, yet Ottawa continues to ignore the evidence," said Dr. Montaner. "Too many lives are at stake for us not to act now. We need to urgently renew the National AIDS Strategy, and embrace TasP to free the next generation of the burden of HIV/AIDS."

Every year, 3,300 men and women in Canada are diagnosed with HIV. An estimated 71,300 Canadians are now living with HIV, a number that could double within the next 15 years if the current rate of new infections continues and treatment is not expanded across Canada.

"Federal Health Minister Rona Ambrose is medically, morally and ethically wrong. This again falls into a pattern on the part of the federal government of acting based on ideology, while ignoring the science."
– Dr. Julio Montaner, in an interview with the Vancouver Sun, responding to the news that federal Health Minister Rona Ambrose had overruled a Health Canada decision that had granted replacement heroin access to SALOME trial participants