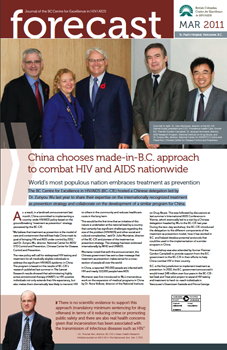 The BC Centre for Excellence in HIV/AIDS (BC-CfE) hosted a Chinese delegation led by Dr. Zunyou Wu last year to share their expertise on the internationally recognized treatment as prevention strategy and collaborate on the development of a similar program for China.As a result, in a landmark announcement last month, China committed to implementing a country-wide HIV/AIDS policy based on the groundbreaking “treatment as prevention” strategy pioneered by the BC-CfE.

The new policy will call for widespread HIV testing and treatment for all medically eligible individuals to address the significant HIV/AIDS epidemic in China. The program is based on the results of BC-CfE’s research published last summer in The Lancet. Research results showed that administering highly active antiretroviral therapy (HAART) to HIV-positive individuals not only extends their life expectancy, but also makes them dramatically less likely to transmit HIV to others in the community and reduces healthcare costs in the long term.

“This would be the first time that an initiative of this nature is undertaken at the national level by a country that certainly has significant challenges regarding the size of the problem [HIV/AIDS] and other social and cultural complexities,” said Dr. Julio Montaner, director of the BC-CfE and pioneer of the treatment as prevention strategy. This strategy has been endorsed internationally by WHO and UNAIDS.

Montaner noted that with this announcement, the Chinese government has sent a clear message that treatment as prevention makes sense for a crosssection of people all over the world.

Montaner was first introduced to Wu’s tremendous work on the expansion of medical programs in China by Dr. Nora Volkow, director of the National Institute on Drug Abuse. This was followed by discussions at last summer’s International AIDS Conference in Vienna, which eventually led to a visit by a Chinese delegation headed by Wu to the BC-CfE last year. During the two-day workshop, the BC-CfE introduced the delegation to the different components of the treatment as prevention model, how it has worked in B.C. and helped develop potential protocols that could be used in the implementation of a similar program in China.

The workshop was also attended by former Premier Gordon Campbell to provide support from the B.C. government to the BC-CfE in their efforts to help China combat HIV in their country.

B.C. is the first jurisdiction to implement treatment as prevention. In 2010, the B.C. government announced it would invest $48 million over four years in the BC-CfE-led Seek and Treat pilot project to expand HIV testing and treatment to hard-to-reach individuals in Vancouver’s Downtown Eastside and Prince George.