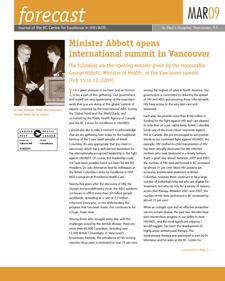 It is a great pleasure to be here, and an honour to be a part of this gathering. Our government and myself are very appreciative of the important work that you are doing at this global Summit of experts convened by the International AIDS Society, the Global Fund, and the World Bank, and co-hosted by the Public Health Agency of Canada and the BC Centre for Excellence in HIV/AIDS.

I would also like to take a moment to acknowledge that we are gathering here today on the traditional territory of the Coast Salish peoples of British Columbia. It’s very appropriate that you meet in Vancouver, which has a well-earned reputation for the internationally recognized leadership in the fight against HIV/AIDS. Of course, this leadership could not have been possible had it not been for the IAS President, Dr. Julio Montaner, and his colleagues at the British Columbia Centre for Excellence in HIV/AIDS a program at Providence Health Care.

Twenty-five years after the discovery of HIV, the Human Immunodeficiency Virus, the AIDS epidemic continues to afflict more than 33 million people worldwide, spreading at a rate of 2.7 million infections every year, so not withstanding the progress that has been made, this continues to be a huge, huge issue.

Among those who struggle every day, with the challenges posed by this terrible disease, there are more than 60,000 Canadians, including over 12,000 British Columbians. In Vancouver’s Downtown Eastside, the prevalence of HIV among injection drug users is estimated at over 15 per cent, among the highest of rates in North America. Our government is committed to reducing the spread of HIV and AIDS and ensuring those infected with HIV have access to the very best care and treatment.