The United Nations (UN) unveiled an ambitious new global plan to end the AIDS epidemic by 2030. The plan embraces the made-in-BC Treatment as Prevention (TasP) strategy pioneered by Dr. Julio Montaner and the BC Centre for Excellence in HIV/AIDS (BC-CfE).

The plan was announced on September 25 by Jan Eliasson, Deputy Secretary-General of the UN, to the UN General Assembly in New York and is supported by UNAIDS Executive Director and UN Under-Secretary-General Michel Sidibé. 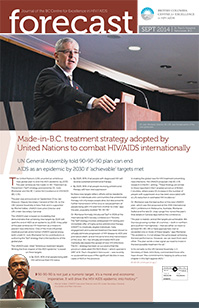 The UNAIDS plan is based on modelling that demonstrates that achieving new targets by 2020 will spell the end of AIDS as an epidemic by 2030. A key pillar of the plan embraces HIV treatment as a means to prevent new infections. One of the most influential medical journals and a former UNAIDS special envoy both credit Dr. Julio Montaner for his contributions in authoring the TasP strategy that is the backbone of the global plan.

The UNAIDS plan, titled “Ambitious treatment targets: Writing the final chapter of the AIDS epidemic” is based on three targets:

“As these new targets reflect, efforts will be needed to explain to individuals and communities that antiretroviral therapy not only keeps people alive, but also prevents further transmission of the virus to sexual partners of people living with HIV and from mother to child,” says the plan, popularly dubbed “90-90-90.”

Dr. Montaner formally introduced TasP in 2006 at the International AIDS Society conference in Toronto. The TasP strategy involves widespread HIV testing and immediate offer of highly active antiretroviral therapy (HAART) to medically eligible individuals. Early engagement and sustained treatment has been shown to virtually eliminate progression of HIV disease to AIDS and premature death, and at the same time tstop transmission of the virus. B.C. has virtually eliminated AIDS and markedly decreased the spread of new HIV infections. The B.C. strategy has been so successful that the province’s dedicated HIV/AIDS Ward -- which opened in 1997 at St. Paul’s Hospital in Vancouver -- was recently re-purposed because of the significant decline in new cases of AIDS in the province.

In making the global case for HIV treatment preventing new infections, the UNAIDS proposal cites BC-CfE research in the B.C. setting. “These findings are similar to those reported in the Canadian province of British Columbia, where every 1% increase in the number of people with suppressed virus has been associated with a 1.2% reduction in estimated HIV incidence.”

Dr. Montaner was the lead author of the new UNAIDS plan, which was first proposed at the 20th International AIDS Conference in Melbourne, Australia. Montaner, Sidibé, and the late Dr. Joep Lange fine-tuned the plan’s final details in Geneva days before the conference.

“This plan is realistic and all the targets are achievable. We found a growing number of countries – both in northern and southern hemispheres – that are either on track to achieve 90–90–90 or have approached, met or exceeded one or more of these targets,” says Montaner. “The problem is, it’s not always the same player achieving the best performance. However, we can learn from each other. This plan sends a clear signal we need to invest in the best possible treatment for all.”

In his remarks to the UN General Assembly, U.S. Secretary of State John Kerry commended those who have shown “the commitment to helping to write a new chapter in this fight against AIDS.”

Stephen Lewis, the former UN secretary general’s special envoy for HIV/AIDS, praised Dr. Montaner for TasP, which has increasingly been adopted by governments and non-profit agencies around the world. China, Brazil, Spain, France, Panama, Australia’s State of Queensland – as well as the U.S. cities of New York, San Francisco and Washington D.C. – have already adopted TasP. “I don’t think Canadians understand the impact of what Julio has done,” Lewis said in Georgia Straight, a Vancouver weekly newspaper.

In an editorial on the milestone announcement of 90-90-90 in Melbourne, The Lancet makes first mention of Dr. Montaner’s groundbreaking work. In “Ending the AIDS Epidemic,” editor-in-chief Richard Horton writes there are papers The Lancet is “immensely grateful” to have published.

“One such Lancet paper is Julio Montaner's truly landmark 2006 viewpoint entitled, rather modestly now looking back, ‘The case for expanding access to HAART to curb the growth of the HIV epidemic.’ The idea of treatment as prevention was born,” writes Horton.

Based on the consolidated guidelines recently put forward by the World Health Organization (WHO) to initiate HIV treatment sooner in order to save more lives and prevent more infections, 90-90-90 replaces Treatment 2015, the UNAIDS campaign aimed at reaching 15 million people with HAART by 2015.Global efforts to increase the number of people getting access to life-saving HAART have advanced quickly, with 12.9 million people now receiving HIV treatment compared with 5.2 million in 2009, according to UNAIDS data.

“We’re almost there in reaching the 2015 goal,” says Montaner. “In conversations about ‘what next,’ we convinced ourselves that we needed not only a very aggressive new target, but a better one. We wanted a target that was comprehensive and no longer uni-dimensional. We wanted to incorporate a cascade of care and virological suppression so we ensure people get durable, sustainable and best-available treatment for their benefit, and ultimately transform the HIV/AIDS pandemic into a low endemic sporadic disease by 2030.”

Health Ministers for both South Africa and Brazil, two countries with high HIV rates, have already endorsed the UNAIDS plan.