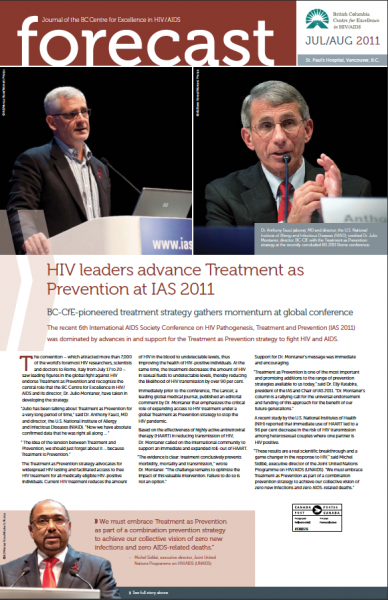 The recent 6th International AIDS Society (IAS) Conference on HIV Pathogenesis, Treatment and Prevention (IAS 2011) was dominated by advances in and support for the Treatment as Prevention strategy to fight HIV and AIDS.

The convention – which attracted more than 7,000 of the world’s foremost HIV researchers, scientists and doctors to Rome, Italy from July 17-20 – saw leading figures in the global fight against HIV endorse Treatment as Prevention and recognize the central role that the BC Centre for Excellence in HIV/AIDS and its director, Dr. Julio Montaner, have taken in developing the strategy.

“Julio has been talking about Treatment as Prevention for a very long period of time,” said Dr. Anthony Fauci, MD and director, the U.S. National Institute of Allergy and Infectious Diseases (NIAID). “Now we have absolute confirmed data that he was right all along … ”

“The idea of the tension between Treatment and Prevention, we should just forget about it … because Treatment is Prevention.”

The Treatment as Prevention strategy advocates for widespread HIV testing and facilitated access to free HIV treatment for all medically eligible HIV-positive individuals. Current HIV treatment reduces the amount of HIV in the blood to undetectable levels, thus improving the health of HIV-positive individuals. At the same time, the treatment decreases the amount of HIV in sexual fluids to undetectable levels, thereby reducing the likelihood of HIV transmission by over 90 per cent.

Immediately prior to the conference, The Lancet, a leading global medical journal, published an editorial comment by Dr. Montaner that emphasizes the critical role of expanding access to HIV treatment under a global Treatment as Prevention strategy to stop the HIV pandemic.

Based on the effectiveness of highly active antiretroviral therapy (HAART) in reducing transmission of HIV, Dr. Montaner called on the international community to support an immediate and expanded roll-out of HAART.

“The evidence is clear: treatment conclusively prevents morbidity, mortality and transmission,” wrote Dr. Montaner. “The challenge remains to optimize the impact of this valuable intervention. Failure to do so is not an option.”

Support for Dr. Montaner’s message was immediate and encouraging.

“Treatment as Prevention is one of the most important and promising additions to the range of prevention strategies available to us today,” said Dr. Elly Katabira, president of the IAS and Chair of IAS 2011. “Dr. Montaner’s column is a rallying call for the universal endorsement and funding of this approach for the benefit of our future generations.”

A recent study by the U.S. National Institutes of Health (NIH) reported that immediate use of HAART led to a 96 per cent decrease in the risk of HIV transmission among heterosexual couples where one partner is HIV positive.

“These results are a real scientific breakthrough and a game changer in the response to HIV,” said Michel Sidibé, executive director of the Joint United Nations Programme on HIV/AIDS (UNAIDS). “We must embrace Treatment as Prevention as part of a combination prevention strategy to achieve our collective vision of zero new infections and zero AIDS-related deaths.”