Is talk of “ending AIDS” just hyperbole, or is this a realistic goal for the research and medical communities?

A recent study in The Lancet HIV journal, authored by researchers at the BC Centre for Excellence in HIV/AIDS (BC-CfE), is adding valuable evidence to a concept long-held by researchers in B.C. The research indicates AIDS and related deaths could not only be controlled, but virtually eliminated, through expanded access to highly active antiretroviral therapy (HAART), evidence-based treatment guidelines, and systems to ensure timely HIV diagnosis and HAART initiation. This is an approach that could be applied internationally.

The study called AIDS incidence and AIDS-related mortality in British Columbia, Canada, between 1981 and 2013: a retrospective study points to steep declines in rates of AIDS-related mortality in B.C. since the mid 90s with the introduction of HAART. There was a further decline in 2006 when the concept of Treatment as Prevention was pioneered and implemented. At the peak of the epidemic in 1994, 696 cases of AIDS were reported. By 2013, the number had fallen to 84 – nearly an 88 per cent decline!

“The research indicates that timely and expanded access to HAART treatment can transform AIDS from an epidemic to an endemic disease,” says Dr. Viviane Dias Lima (PhD.), lead author of the study and BC-CfE Research Scientist and Senior Statistician. “Having the study published in The Lancet HIV journal gives further weight to the case for the expansion of HAART treatment and TasP initiatives, both within Canada and worldwide.”

The study analyzed data from individuals living with HIV aged 19 years or older, who have ever accessed HAART in B.C. Researchers saw significant downward trends in AIDS deaths as treatment guidelines evolved towards more immediate and sustained initiation of HAART. Among people living with HIV in British Columbia, the study finds:

Researchers also found, since the introduction of HAART, vertical transmission of HIV – from a mother to an infant –has been virtually eliminated in B.C. In addition, HIV positive individuals are now living longer and healthier lives, and becoming part of an aging population. 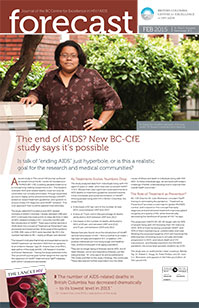 “They are no longer dying of illnesses due to AIDS, but of heart disease, cancer and respiratory illnesses, just like everyone else,” Dr. Lima says in an article published in The Globe and Mail on the study’s findings. She continued,“These data warrant further exploration into the other causes of illness and death in individuals living with HIV/AIDS. As these individuals age, we are faced with today’s challenge of better understanding how to improve their overall health outcomes.”

The Role of Treatment as Prevention

BC-CfE Director Dr. Julio Montaner considers TasP the key to eliminating the pandemic. “Treatment as Prevention provides a road map for global HIV/AIDS control, and is based on the concept that early diagnosis and antiretroviral treatment improves patient longevity and quality of life, while dramatically decreasing the likelihood of spread of HIV,” he says.

The proposed UNAIDS 90-90-90 target calls for 90% of people living with HIV knowing their HIV status by 2020, 90% of them receiving sustained HAART, and 90% of them maintaining an undetectable viral load. Meeting the proposed target by 2020 will maximize the effectiveness of existing tools to virtually eliminate progression to AIDS, premature death and HIV transmission, and thereby transform the HIV/AIDS pandemic into a low level sporadic endemic by 2030.