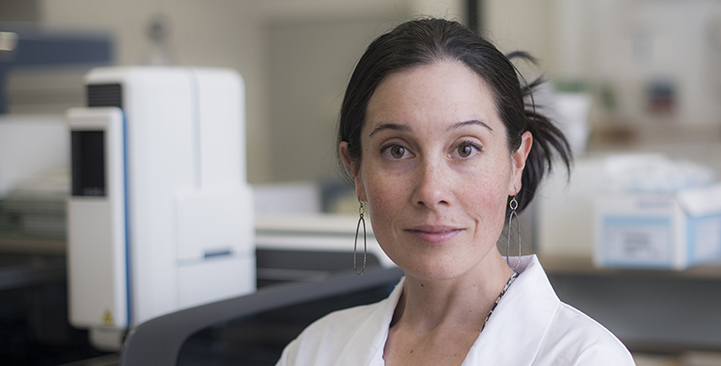 The first time Dr. Zabrina Brumme entered the BC Centre for Excellence in HIV/AIDS (BC-CfE), she had no idea she would one day be the director of its innovative Laboratory Program. She was only seventeen at the time and had not yet embarked on a career in HIV research that would introduce her to many international leaders in the field. She laughs about it now, convinced that as a wide-eyed teenager she likely didn't make much of an impression on one of the luminaries in HIV research, Dr. Julio Montaner.

"I am pretty sure Julio doesn't remember that meeting," she said. "But he was gracious enough to meet with a young, ambitious student interested in interviewing an expert as part of a high school thesis project on HIV."

Born and raised in Vancouver, Dr. Brumme's original goal was to teach biology and English literature. While completing a bachelor of science at the University of British Columbia (UBC), it was a co-op work placement at the BC-CfE that exposed her to a career in HIV/AIDS research, sparking a lifelong passion. After graduating from UBC, Dr. Brumme traveled and then eventually circled back to the BC-CfE to do research and help with the clinical genotyping program. Even then, her career focus remained on ultimately becoming a high school teacher.

The BC-CfE's Founding Director at the time, Dr. Michael O'Shaughnessy, had a habit of checking in with students to talk to them about career and future ambitions. "He gave me advice that drove me toward a career in science," said Dr. Brumme. O'Shaughnessy told Dr. Brumme that a path to becoming a scientist could lead to teaching; while pursuing teaching may make the path back to science difficult.

With a revised career plan, Dr. Brumme acquired a Ph.D. in experimental medicine from UBC and went on to complete a post-doctoral fellowship at the Ragon Institute of Massachusetts General Hospital (MGH), MIT and Harvard University, under the mentorship of the highly recognized HIV researcher Dr. Bruce Walker. Dr. Brumme says that experience keeps on giving – she still collaborates with many former colleagues met at Harvard and continues to cultivate those rich international networks.

Under Dr. Walker's direction, Dr. Brumme had three years of exploration in science and mentorship, with access to a wealth in ideas and resources. Her former mentor sees her new role as BC-CfE Laboratory Program Director as a great fit: "Zabrina brings enormous scientific talent and creativity to this role, but equally important is her gift for stewarding effective scientific collaboration locally, nationally and internationally," said Dr. Walker, Director of the Ragon Institute. "She is a clear leader, committed to creating knowledge while invested in the success of others."

During her time at Harvard, Dr. Brumme collaborated internationally with Dr. Thumbi Ndung'u, Scientific Director of the HIV Pathogenesis Programme at the University of KwaZulu Natal in South Africa. He echoes the theme of her strength as a collaborator, who holds both herself and her team to very high standards.

"Zabrina is a fantastic teacher and a visionary with a generous spirit. She brings people together," said Dr. Ndung'u. "She is a great choice to lead the BC-CfE and I have no doubt that with this appointment, the Centre will grow in its scientific contributions and expand its collaborations and influence in fighting HIV/AIDS in Canada and globally."

By 2009, Dr. Brumme was back at home – this time at SFU – where HIV researchers including Drs. Bob Hogg and Jamie Scott were helping establish a vibrant interdisciplinary HIV research team in SFU's new Faculty of Health Sciences. Brumme landed her assistant professorship there in 2009, where she is now an associate professor. 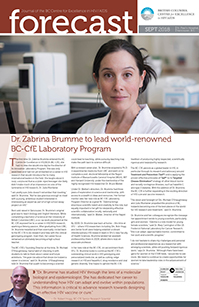 In her new role at the BC-CfE, on secondment from SFU, Dr. Brumme looks to continue the BC-CfE's outstanding clinical work in HIV genotyping and personalized medicine, as well as cutting-edge research in HIV and hepatitis C drug resistance and viral genetic diversity. She hopes to uphold the BC-CfE tradition of producing highly respected, scientifically rigorous and newsworthy research.

The BC-CfE persists as a global leader in HIV, in particular through its research and advocacy around Treatment and Prevention (TasP) and is applying the proven effective principles of TasP to its Targeted Disease Elimination strategy of other blood-borne and socially contagious illnesses, such as hepatitis C and type 2 diabetes. With the addition of Dr. Brumme, the BC-CfE is further expanding in the exciting direction of HIV cure and vaccine research.

"The global reputation of the BC-CfE Laboratory Program is outstanding," said Dr. Brumme. "The vision and foresight of Drs. Michael O'Shaughnessy and Julio Montaner propelled the province of BC towards becoming one of the best places in the world for HIV research and treatment."

Dr. Brumme and her colleagues recognize the message her appointment sends to young scientists, particularly girls and women. "Zabrina is a role model for young female scientists," said Dr. Mary Carrington of the US Frederick National Laboratory for Cancer Research. "She is an adept, approachable mentor, committed to her work and scientific progress."

"I do not hesitate to share my challenges and personal and professional experiences as a researcher with emerging scientists, while still pushing forward rigorous work," says Dr. Brumme. "Although there have been gains for women in the STEM fields, I would like to see more. We need to continue to create opportunities for women to take leadership roles in the advancement of science."