China is facing an HIV epidemic that is on the scale of its population of approximately 1.4 billion. The BC-CfE is providing valuable insights on successful tactics, programs and strategies implemented in British Columbia to curb HIV. Namely, the BC-CfE's Treatment as Prevention (TasP) strategy has transformed the province from the one with the highest number of new HIV diagnoses to one of the lowest (despite being one of the most populous provinces).

On October 29th, delegates from the BC-CfE traveled to Beijing to meet with members of the National Centre for AIDS/STD Control/Prevention and Chinese Centre for Disease Control and Prevention (NCAIDS/China CDC) and renewed their partnership to address HIV and AIDS. The BC-CfE and NCAIDS/China CDC signed a memorandum of understanding to collaborate on health priorities affecting China and British Columbia in relation to HIV/AIDS and hepatitis C virus (HCV).

"China will continue to use the best science and evidence from around the world and implement strategies that have a real impact on curbing the transmission of HIV and AIDS," said Dr. Zunyou Wu, Chief Epidemiologist China CDC and Director of Division of HIV Prevention, NCAIDS/China CDC.

"For people to be able to participate fully in the labour force and to proactively participate in their communities, health is a very important thing," said Jim Nickel, Deputy Head of Mission, China, with Global Affairs Canada who spoke at the October MOU signing in Beijing. Mr. Nickel said the work by China and Canada is important for sustainable development.

The collaboration between BC and China began in 2009 and China was the first nation to formally announce its adoption of the BC-CfE-pioneered TasP strategy in 2011. This was followed by the signing of the first MOU between the BC-CfE and China in 2013.

For several successive years, new HIV diagnoses have increased in China, attributable to increased access to testing. Prior to access to testing, individuals may have been unaware they were living with HIV for a number of years. China is committed to expanding the number of individuals accessing testing and treatment in order to attain the 90-90-90 Target of 90% of people living with HIV diagnosed, 90% of those diagnosed on treatment, and 90% of those on treatment virally suppressed.

Joint research projects between the BC-CfE and China during their previous partnership showed increased access to testing and treatment initiation. In particular, a trial in the Guangxi region to eliminate wait times and extra steps in the testing and diagnosis process had positive results. The intervention helped avert new cases of HIV and save in costs due to avoided illness; the process of testing resulted in a 91% increase in ART initiation and a 62% drop in mortality. 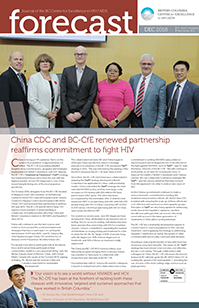 The China and BC-CfE MOU renews a three-year fellowship program bringing three of among China's top scientists to Vancouver to collaborate with researchers and clinicians at the BC-CfE.

"Our partnership with Dr. Zunyou Wu and his colleagues is based on mutual trust and collaboration and a deep commitment to ending HIV/AIDS using evidence-based research and strategies known to be effective in the fight against HIV/AIDS, such as TasP," says Dr. Julio Montaner, Director of the BC-CfE. "We will continue to work jointly, as we have for several years now, to improve the health of British Columbians and Chinese citizens. We can collaborate to advance strategies like TasP—and the various initiatives that have evolved from this approach—in order to reduce new cases of HIV."

"Through our use of phylogenetics, we have been able to demonstrate a way to identify current hotspots of HIV transmission. In British Columbia, this has allowed us to target these emerging epidemics through early health interventions," said Dr. Jeffrey Joy, BC-CfE Research Scientist. "We hope that sharing our knowledge with our colleagues in China, will provide them yet another tool to efficiently and cost-effectively target hotspots of HIV and hepatitis C transmission."

"Identifying those living with HIV through widespread and normalized testing approaches helps to expand treatment and to have a positive impact on the HIV epidemic," says Dr. Viviane Dias Lima, Research Scientist and Senior Statistician at the BC-CfE. "These core fundamentals of TasP are vitally important in controlling HIV in a population of China's size."

As the Chinese government continues to make a serious domestic commitment to funding HIV treatment and prevention efforts, NCAIDS/China CDC is tasked with ensuring the scale up of these efforts are cost-effective and reach across demographic groups. Principles of TasP are also being applied to addressing reinfection in the hepatitis C epidemic, another bloodborne pathogen that can now be effectively cured with access to the latest generation of treatments or DAAs (direct acting antivirals).

The BC-CfE has consistently developed programs to connect hard-to-reach populations to HIV care and treatment—and is applying the strategy to addressing hepatitis C reinfection as well as the spread of other communicable and socially communicable diseases.

Investing in reducing the burden of new infections has enormous long-term benefits. The made-in-BC TasP strategy has been shown to be not only cost-effective, but also cost-saving. Through collaboration with colleagues in China, the BC-CfE will ensure the lessons learned in BC will help guide the NCAIDS/China CDC in curbing the spread of HIV and hepatitis C, including the use of some of the most cutting-edge science such as phylogenetics.