On Sunday December 1, 2019, World AIDS Day, the Minister of Health Adrian Dix and the BC Centre for Excellence in HIV/AIDS (BC-CfE) announced the end of AIDS as an epidemic in British Columbia (BC). The announcement was made along with the opening of the BC-CfE’s new laboratory on Powell Street. The new BC-CfE Research Laboratory is expanding its clinical and research services, including HIV cure research, further drug resistance testing and phylogenetics monitoring.

Since 1992, the BC-CfE has closely monitored and evaluated HIV and AIDS rates in BC including recording new cases of HIV, testing rates, the number of people on treatment and new cases of AIDS. The BC-CfE revealed that AIDS cases have declined by over 90% since 1994, while new HIV cases have declined by over 75%. Both rates are at their lowest since the HIV crisis first arrived on the doorsteps of BC. The rate of new AIDS cases in BC now meet the UNAIDS working definition of ending AIDS as an epidemic as outlined by the organization’s 90-90-90 Targets. In BC, AIDS has now transitioned from an epidemic to an endemic concern.

This announcement adds to the BC-CfE’s legacy of leading the way in innovative research and care for HIV and AIDS. In 1996, the BC-CfE pioneered highly active antiretroviral therapy (HAART) which significantly reduced a patient’s viral load, decreasing morbidity and mortality. This led to the BC-CfE’s Treatment as Prevention (TasP ) strategy - introducing earlier, sustained access to care and treatment to reduce patients’ viral load to undetectable levels. This made-in-BC, strategy decreased HIV-related morbidity and mortality as well as HIV transmission in BC. TasP is the foundation of the global UNAIDS 90-90-90 Targets to end the AIDS epidemic worldwide by 2030.

“Since the first AIDS patients presented to St. Paul’s Hospital in downtown Vancouver, struggling against stigma and marginalization, community, researchers and clinicians worked tirelessly to advance evidence-based research to inform BC’s HIV treatment policies,” said Dr. Julio Montaner, BC-CfE Executive Director and Physician-in-Chief. “This included pioneering effective treatment, supporting widespread availability of antiretroviral therapy and making PrEP (pre-exposure prophylaxis) available to those deemed most at risk of contracting HIV. We are now reaping the rewards of this province’s continued commitment to provide the best possible care for HIV as we set a standard for the rest of the world.” 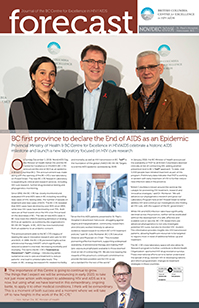 In January 2018, the BC Minister of Health announced the availability of PrEP to all British Columbians deemed clinically at risk of contracting HIV, adding another prevention tool to BC’s TasP approach. To date, over 5,000 people have initiated treatment as part of this program. Preliminary data indicates that PrEP is working in tandem with early treatment of HIV to further reduce new infection rates in the province.

“British Columbia is known around the world as the catalyst for pioneering HIV treatment, research and innovative strategies,” said Dr. Montaner. “We will advance our phylogenetics research and grow our Laboratory Program here at 647 Powell Street to better address HIV and continue our investigations into finding an HIV cure, with the support of the BC government.”

While HIV and AIDS infection rates have significantly declined across the province, neither will be eradicated without the development of a safe, effective and scalable cure or vaccine. BC-CfE researchers use advanced phylogenetics to not only investigate potential HIV cures, but also to monitor HIV ‘clusters’. This information provides insights into HIV transmission patterns, allowing healthcare resources to be targeted to regions most in need of additional follow-up and treatment.