BC-CfE Recognized with LifeSciences BC Award for Clinical Research Excellence

The BC Centre for Excellence in HIV/AIDS (BC-CfE) was honoured on April 16, 2015, during the 17th Annual LifeSciences BC Awards, for its accomplishments advancing science to treat and prevent HIV and AIDS in British Columbia and around the world. The LifeSciences event, hosted by Bob McDonald of Quirks and Quarks, celebrated the theme of “Growing Community, Collaboration and Value.”

“This year’s theme of collaboration is fitting in light of the invaluable support the BC-CfE has received throughout the years from community partners and the provincial government,” said Dr. Julio Montaner, Director of the BC-CfE. “We are greatly honoured to receive this award and recognition for the advances made in the fight against HIV and AIDS in B.C. As the BC-CfE moves forward in our research on testing, treatment and care, I believe with the continued support of our partners, we can reach an AIDS-free generation here and worldwide.” 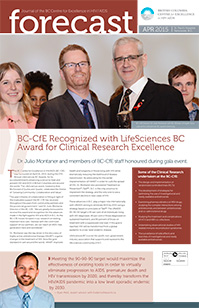 Dr. Montaner was the key driver in the discovery of highly active antiretroviral therapy (HAART), a game changer in the treatment of HIV. Now the gold standard in care around the world, HAART improves St. Paul’s Hospital, Vancouver, B.C. health and longevity of those living with HIV while dramatically reducing the likelihood of disease transmission. By advocating for the earlier implementation of HAART in order to curb the spread of HIV, Dr. Montaner also pioneered Treatment as Prevention (TasP). B.C. is the only province to implement the strategy, and the only one to see a consistent decline in new cases of HIV.

These advances in B.C. play a major role internationally with UNAIDS aiming to eliminate AIDS by 2030 using a strategy based on principles of TasP. The UNAIDS’ 90-90-90 target is 90 per cent of all individuals living with HIV diagnosed, 90 per cent of those diagnosed on sustained treatment, and 90 percent of those on treatment with a suppressed viral load. If this goal is reached, HIV will be transformed from a global epidemic to a low-level endemic disease.

LifeSciences BC is a not-for-profit, non-government, industry association that supports and represents the life sciences community of B.C.

Some of the Clinical Research undertaken at the BC-CfE: