A paper describing the study, Aboriginal street-involved youth experience elevated risk of incarceration, was recently published in the journal Public Health. It looked at data collected from 1050 youths between the ages of 14 and 26 years – one quarter identified as Aboriginal – over an eight-year period between September 2005 and May 2013 through the At–Risk Youth Study (ARYS). Over the study period, 36 per cent of participants reported having spent at least one night in detention, prison or jail in the last six months, with significantly higher rates for youth from an Aboriginal background.

Researchers took into account drug use, homelessness and other factors that might place youth at greater risk of imprisonment, but still found street-involved Aboriginal youth were more likely to end up incarcerated. Study senior author Dr. Kora DeBeck, Research Scientist at UHRI and Assistant Professor in the School of Public Policy at Simon Fraser University, notes, “One possible explanation is that policing practices disproportionately target Aboriginal youth, resulting in higher rates of incarceration among this group, although further research is needed to confirm this.” 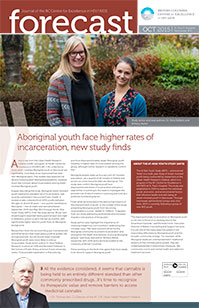 Aboriginal people make up four per cent of Canada’s population, yet a quarter of all inmates in federal and provincial correctional facilities are Aboriginal. The study data confirm Aboriginal youth face disproportionate levels of incarceration and goes a step further in pointing to the need to investigate the possible role of discrimination in policing practices as a potential contributing factor.

“Given what we know about the destructive impacts of the imprisonment of youth, in the context of this study, preventing Aboriginal youth from becoming incarcerated is crucial,” added Dr. DeBeck. “It appears from our study addressing institutional discrimination may be a critical piece of the puzzle.”

Study authors also highlight the importance of involving Indigenous communities in addressing this complex issue. “We need solutions driven by the Aboriginal community to prevent incarceration and strengthen the health and wellness of young Aboriginal people,” said study lead author, Brittany Barker, researcher with UHRI and a doctoral student at the University of British Columbia.

Those working on the front lines agree that more needs to be done to support Aboriginal youth. “The disproportionate incarceration of Aboriginal youth is not new to those of us working here in the Downtown Eastside,” said Michelle Fortin, Executive Director of Watari Counselling and Support Services. “It is just one of the many ways the system is not responding effectively to Aboriginal youth and the broader community at large. For example, while Aboriginal adults are overrepresented in traditional streams of the criminal justice system, they are underrepresented in diversionary measures, like community courts and mental health and addiction treatment services.”