What does U=U mean and why is it important? 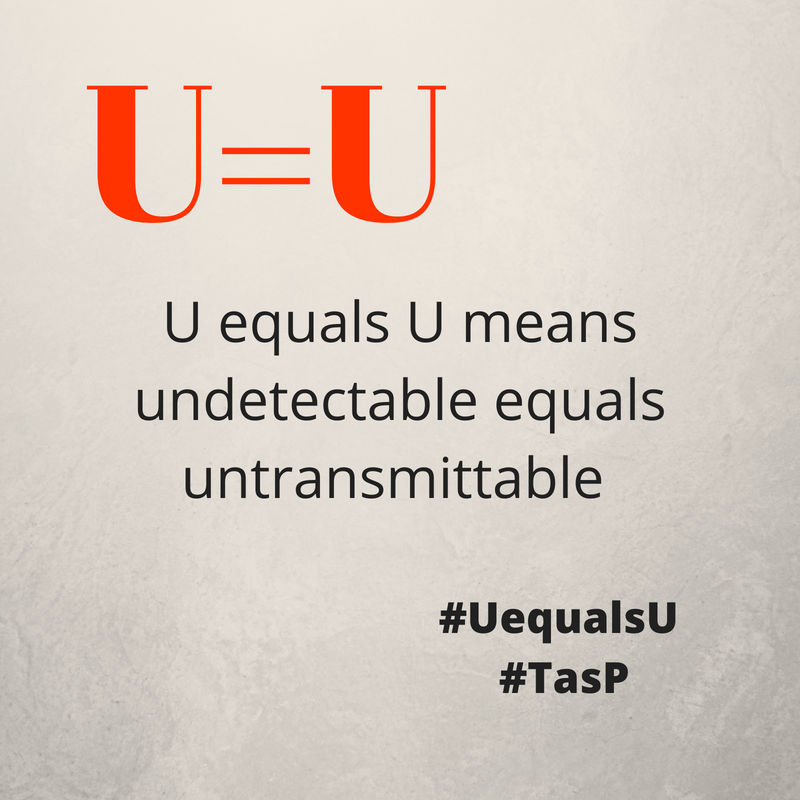 Treatment as Prevention, pioneered by Director of the BC-CfE Dr. Julio Montaner, forms the foundation for an international movement to establish that undetectable equals untransmittable. The U=U campaign, led by the Prevention Access Campaign, already has a number of very prominent international endorsers on board, including Dr. Montaner, Dr. Demetre Daskalakis of the New York City Department of Health and Mental Hygiene and Dr. Michael Brady of the Terrence Higgins Trust in London.

Dr. Montaner introduced the concept of Treatment as Prevention (TasP) to the world at the International AIDS Conference in Vancouver in 2006, and it is the science supporting the U=U movement. On a grand scale, TasP, the immediate and universal access to HIV treatment immediately upon diagnosis, has been proven effective in reducing rates of HIV infection. The province of British Columbia has provided universal access to HIV treatment as part of a TasP strategy since 2013.

On an individual level, TasP improves quality of life and renders people living with HIV unable to transmit the virus to others. How does it work exactly? On sustained and consistent treatment, an individual’s level of virus becomes undetectable in standard blood tests. At this point, the chances of transmitting the virus are negligible.

A major international study called the PARTNERS, with peer-reviewed research results published in 2016, found zero transmission of virus between HIV sero-discordant couples in which the person living with HIV had undetectable levels of virus. The study cohort included nearly 900 couples who had sex without condoms more than 58,0000 times.

“When it comes to science, this is as good as it gets,” Dr. Montaner said of the study on a recent BC-CfE webinar. U=U has been gaining ground as scientific consensus has coalesced around the concept that being undetectable means being unable to transmit HIV. In the fall of 2017, the US CDC declared that an individual with durably undetectable could not transmit the virus through their blood or sexual fluids.

We can say that the risk of transmission from an HIV-positive person who takes treatment and has an undetectable viral load may be so low as to be unmeasurable, and that’s equivalent to saying they are uninfectious. It’s an unusual situation when the overwhelming evidence base in science allows us to be confident that what we are saying is fact.” — Dr. Anthony Fauci, Director of the National Institute for Allergies and Infectious Diseases at the US National Institutes of Health.

Beyond the science, the U=U movement is changing the conversation around HIV and is aiming to decrease the stigma that too often accompanies living, dating and loving with HIV.

Misconceptions and stigma can deter individuals from accessing HIV treatment. Add to this stigma barriers such as inadequate health insurance coverage, poverty, racism and criminalization, and care can seem out of reach to some. These factors can allow HIV to persist, unchecked and untreated.

It is important to expand public knowledge around TasP and the U=U movement. The supporting science needs to be communicated effectively and broadly to communities affected by HIV. While research from the BC-CfE has shown that awareness of TasP is growing, among the community of men who have sex with men, for example, gaps in knowledge and education remain.

As the U=U movement advances, there are laws and policies that need to catch up. Currently, it remains a crime in Canada – categorized as aggravated sexual assault – not to disclose one’s sexual status with consenting sexual partners, even if there is zero chance of transmission due to undetectable levels of virus. On World AIDS Day in 2016, the Canadian federal government committed to re-examining this law based on existing evidence. The BC-CfE looks forward to continued policy changes to reflect the reality of U=U.

Alongside gaining awareness around TasP and U=U, there are actions that individuals can take to protect their own health. “Everyone, everyone should get tested for HIV,” said Dr. Montaner. Accessing care for those living with HIV is the next step and maintaining consistent, sustained treatment is essential for achieving an undetectable viral load. For individuals who are at a high risk of acquiring HIV, PrEP is an additional tool for HIV prevention. As of January 1st in BC, PrEP has been available universally to individuals in those high-risk groups. Mathematical modelling from the BC-CfE has shown the combination of access to TasP and PrEP could effectively end AIDS in BC within the next decade.

In June, the BC-CfE’s Clinical Education and Training Program hosted a webinar on how TasP, combined with access to the HIV prevention drug PrEP, can curb the spread the HIV epidemic. The full video recording is available online.