Repurposing of the HIV/AIDS Inpatient Ward - Vancouver Leads the Way 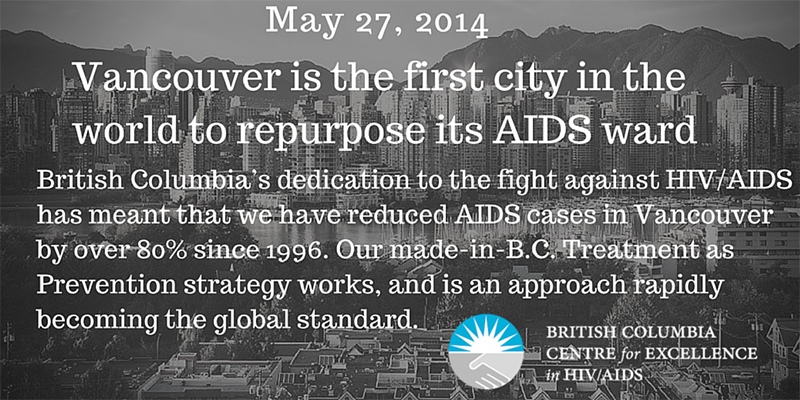 One year ago today, B.C. Premier Christy Clark, B.C. Health Minister Terry Lake, BC-CfE Director Julio Montaner, and UNAIDS Executive Director Michel Sidibé marked a milestone in British Columbia’s fight against HIV and AIDS: the repurposing of a St. Paul’s Hospital 10C Ward that had served those dying from AIDS, starting in 1997 at the peak of the epidemic in Vancouver. With support from the provincial government, the BC-CfE had successfully led the charge in declining the number of HIV and AIDS cases in BC through the implementation of Treatment as Prevention. According to a study published this year, between 1994 and 2013, the number of AIDS cases in the province dropped by 88%.

Due to the declining number of people with HIV and AIDS requiring hospitalization, admission criteria for St. Paul’s Hospital’s 10C Ward were broadened last year. Criteria were changed to include not only people living with HIV who required hospitalization for medical reasons. Those admitted now include HIV-negative individuals with active substance use issues who require hospitalization for management of other infections. The former HIV/AIDS inpatient unit had been a 20-bed ward. The repurposing included expansion to 24 beds in order to address the increasing demand for inpatient services required for the management of infections among patients with substance use disorders. The admission policy for the repurposed 10C remains preferential to patients who are living with HIV.

Since the implementation of the changes to 10C, the ward is usually at or close to full occupancy. The team members have adjusted well to the increased patient numbers. There are usually one to three new admissions per day to the ward. After input from both health care team members and patients, the 10C service has been renamed the Urban Health Infection Unit. The ward continues to be an important resource that is very receptive to people with HIV/AIDS, and also those with substance use disorders.

Starting even before the creation of the Urban Health Infection Unit, a growing number of patients admitted to the ward were referred to the Providence Health Care/St. Paul’s Addiction Consult Team (see chart below) - demonstrating a need for such targeted care. This expert team is aiming to be a national leader in early intervention and treatment for substance use disorders. The group of specially trained physicians provides evidence-based care and treatment for those with substance use disorders, based on principles of compassion and social justice. Find more information about the team on the Providence Health Care website.