Lessons from BC Shared with Delegation from Queensland 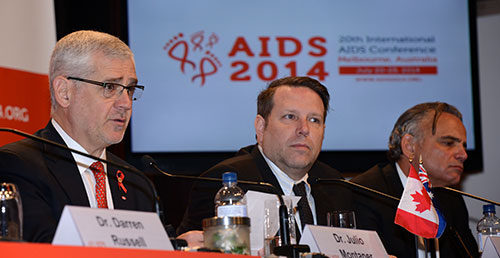 In July 2014, the BC-CfE signed a Memorandum of Understanding with the state government of Queensland, Australia, to provide input and guidance on implementing an HIV and AIDS strategy based on principles of the made-in-BC Treatment as Prevention approach. This March, a delegation from Australia’s second-largest state came to meet with researchers and staff of the BC-CfE to learn more about the work being done in B.C.

The delegation included representatives from the HIV Foundation Queensland, University of Queensland, the Queensland Department of Health and Queensland Positive People (a peer-based advocacy organization committed to promoting empowerment for those living with HIV).

Queensland’s draft five-year long HIV strategy (2015-2020) will work towards achieving the goals established in the UNAIDS 90-90-90 program: 90% of all people living with HIV diagnosed; 90% diagnosed on sustained treatment; and 90% on treatment virally suppressed. As they look forward to meeting these goals, representatives from Queensland were eager to acquire lessons learned on the ground in B.C. – where new HIV cases have been on a consistent decline since the implementation of highly active antiretroviral therapy (HAART) and TasP programs.

The delegation learned about the successes accomplished in B.C. through the Treatment as Prevention strategy, as well as groundbreaking research and knowledge translation initiatives.

“The BC-CfE is very skilled and competent with knowledge translation and communications,” said Dr. Darren Russell, Chair of the HIV Foundation Queensland. “The work of the BC-CfE in knowledge transfer from research is driving forward more effective, science-based programs and services. It was inspiring to learn of effective collaboration with community stakeholders and overall dedication to partnerships.”

The demographics of Queensland and British Columbia have several similarities. The Australian state faces challenges in reaching populations across its large geographical area, particularly in more isolated and rural areas.

And like in B.C., HIV prevalence in Queensland is very low among people who inject drugs and sex workers due to the implementation of harm reduction programs. One contrast to Canada: In Australia, such programs have been implemented across the country, which has resulted in nationwide low rates among these groups.

Currently, the major challenge in Queensland is achieving similar reductions as B.C. in HIV among men who have sex with men.

Queensland has taken a very proactive approach to confronting increasing rates of HIV being seen in the state and around Australia. In 2013, Queensland was the first state to offer free HIV tests through sexual health clinics, some general practices, and emergency departments.

Since the signing of the MOU in Queensland, efforts have continued. For example, the rapid testing program has expanded in 2014 to include outreach testing in strategic locations. The Rapid Roadshow program is set to become a permanent part of the HIV Foundation Queensland and brings 20-minute HIV rapid tests – as well as resources, condoms and information on where to test – to communities across the state.

The Queensland delegation heads home eager to apply lessons learned at the BC-CfE.

“The highlights of our trip to British Columbia have included learning from BC-CfE’s wealth of data, and witnessing the power of linking laboratory, testing and treatment data,” said Russell. “This is an effective platform for analysis that contributes to a strong evidence base.”

The next steps ahead in Queensland are to increase access to prevention programs, to continue to expand innovative access to testing in a diverse range of clinical and community settings, and to improve engagement in care and adherence to treatment.

In April, the Queensland HIV Treatment Forum will bring together over 50 HIV clinicians, policymakers, and community partners to promote Treatment as Prevention and discuss how to address issues at the clinical level. Then in September, Brisbane, Queensland, will host the Australasian HIV Conference and the World STI HIV Summit.

Watch video below of the 2014 signing of the MOU with Queensland.