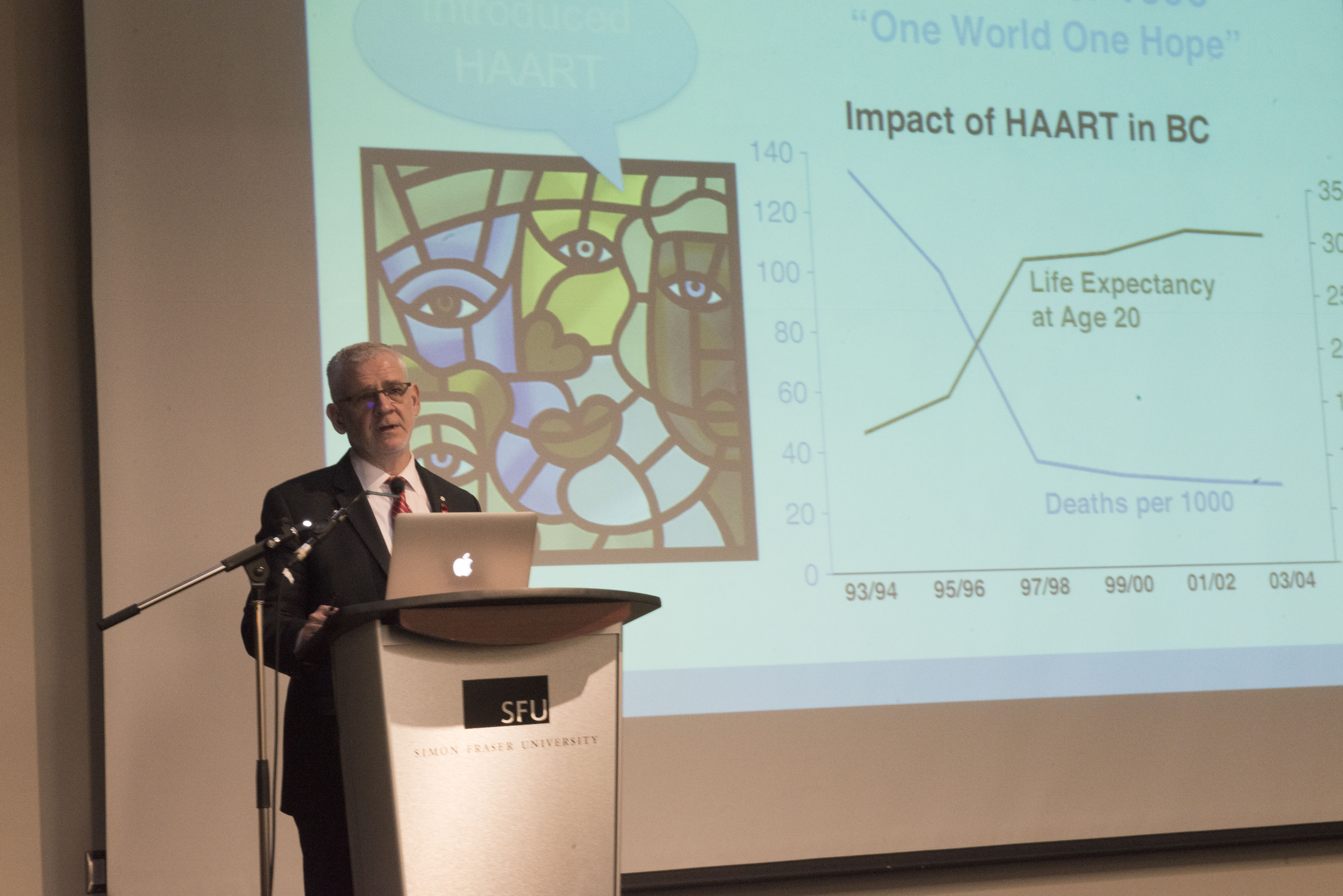 The kick-off for the Simon Fraser University (SFU) Presidential Dream Colloquium generated much energy and optimism around continued advocacy for individuals living with HIV in Vancouver and across Canada—with the goal in mind of seeing an end to AIDS. However, Dr. Julio Montaner, BC-CfE Executive Director and Physician-in-Chief, warned there is a strong possibility for HIV to see a global resurgence if world leaders become complacent.

Dr. Montaner said we need to increase funding and access to treatment if we are to end AIDS. Unfortunately, global funding has flatlined since around 2006, when Dr. Montaner introduced the lifesaving and made-in-BC Treatment as Prevention strategy to the world at the IAS Conference. Dr. Montaner was instrumental to the development of lifesaving highly active modern antiretroviral treatment (the gold standard of treatment today), which began to change the trajectory of the HIV epidemic when he introduced it in 1996.

The first Colloquium lecture was an opportunity to look back at the history of HIV in Vancouver, including the once-burgeoning activist movement and ongoing scientific developments. In Dr. Montaner’s case, the start of the HIV epidemic in North America closely coincided with his arrival in Vancouver from Argentina to train in respiratory medicine. It ended up changing the course of his life’s work, as he dedicated himself to treatments and strategies against HIV.

Valerie Nicholson, a community advocate and a peer research associate, spoke to the public protests that led to significant changes in how we treated the disease of HIV itself, as well as the individuals living with HIV. She cited a public information campaign that successfully led to increasing supports for mothers living with HIV in Vancouver. Like Dr. Montaner, Nicholson cautioned against complacency because harmful stigma still exists. She recounted mistreatment and discrimination she had experienced in the health care system as a person living with HIV.

At the lecture event, the at-capacity crowd got the chance to see never-before-seen pieces from local artists including Nicholson, Tiko Kerr and Joe Average. The exhibit also featured a series of bodymaps that trace the impacts, emotions, feelings and experiences of living with HIV. These compelling, large-scale illustrations within bodylines were created by participants in a study on HIV, art and criminalization.

The Presidential Dream Colloquium is organized and hosted by SFU. Now in its 13th run, the series brings together international experts to dive into discussions on a particular topic area in free public lectures. The next upcoming lectures will focus on the criminalization of HIV non-exposure (February 5) and HIV and Indigenous communities (February 26). Check online for more information and to register to join upcoming events.