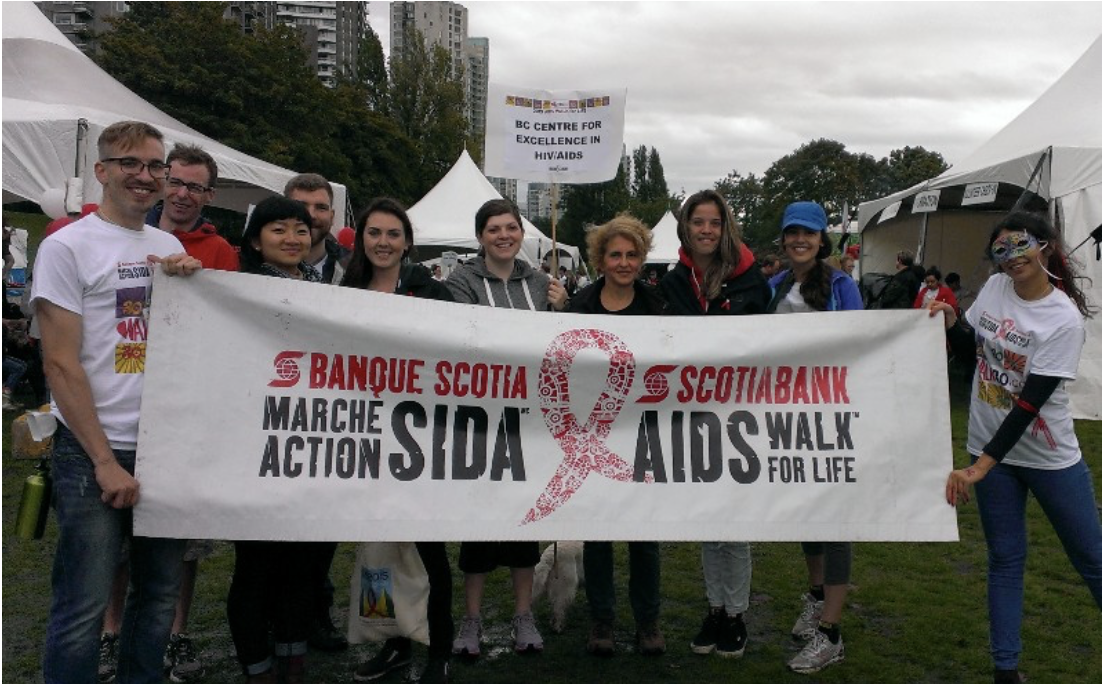 By Kate Salters, Post-Doctoral Fellow with the BC Centre for Excellence in HIV/AIDS (BC-CfE) and winner of the 2018 New Investigator Award in Clinical Sciences from the Canadian Association for HIV Research;Megan Marziali, Research Assistant with the BC-CfE; and Sharyle Lyndon, a person living with HIV and a Peer Research Assistant at the BC-CfE

In Vancouver in 1986, a small but dedicated group came together and walked to honour loved ones, friends and family lost to the deadly HIV epidemic—launching the Vancouver AIDS WALK. Fast forward 32 years and this year’s annual walk is coming up on September 23rd, organized by the Positive Living Society of BC.

Public attention on the issue of HIV and AIDS has dwindled over the years. Those of us working in the field are often asked, “isn’t HIV resolved now?” Locally, this is reflected by the 37% decrease in donations for the Vancouver AIDS Walk over the past five years. On a global scale, we have seen funding for HIV plateau and remain flat for some time.

All proceeds raised by the Vancouver AIDS Walk go towards the Community Health Fund, which reimburses some health-related expenses for low-income people living with HIV throughout the province. More than just a fundraising opportunity, the Vancouver AIDS WALK is about visibility: a moment to remember those lost, to help those in need and to empower the community.

Far from the deadly disease it was in the 80’s and 90’s, HIV has been transformed through the availability of modern antiretroviral therapy into a manageable illness for those who have access to treatment.

But HIV is not over. There are many reasons we are still walking after more than 30 years.

While British Columbia has been a global model on how to stop HIV, there are around 12,000 people living with HIV in the province. The province has seen a consistent decline in new HIV cases, thanks largely to the development of highly active antiretroviral therapy (HAART) and the implementation of the Treatment as Prevention strategy pioneered by the BC Centre for Excellence in HIV/AIDS (BC-CfE).

BC sees about 200 new cases of HIV per year, down from a peak of around 900 at the start of the epidemic. Individuals who have recently been diagnosed with HIV need immediate access to care and treatment, to improve their quality of life and reduce the spread of the disease. In addition to medical care, peer support and advocacy provided by AIDS service organizations can be enormously beneficial in navigating stressors that can accompany a diagnosis.

People living with HIV may face complex health concerns, complicated by co-occurring illnesses such as cancer and other chronic diseases. Instances of non-AIDS-defining cancers have increased among this group and are now the leading cause of death, according to a Canada-wide study from the BC-CfE. The incidence of such cancers is twice as high in people living with HIV compared to the general population.

Thirty years later, aging with HIV is a novel and complex issue. Older, long-term survivors lost so many friends and lovers in the early days of the epidemic. At the time of their diagnosis, they may have been told to “make arrangements” and didn’t plan on needing to save for retirement. Some are left scrambling with few resources.

Stigma persists in daily life, health care settings and society at large—which can create barriers to accessing HIV testing and treatment. Even today, people living with HIV may be thrown into precarious financial or personal situations, such as losing social supports, due to their HIV status.

Overcoming a sense of complacency is critical to supporting those living with HIV today and to ending this global epidemic affecting millions.

We can’t afford not to address this issue and more can be done in Canada and elsewhere. Despite its proven success in controlling HIV and lowering health care costs, Treatment as Prevention has yet to be implemented as a strategy nationwide. Notably, and in a promising step towards curbing the spread of HIV, several provinces have added full or partial coverage for the HIV prevention drug PrEP.

Alongside reductions in private donations to AIDS service organizations, government funding is being diverted away from this important global cause. We have come a long way in terms of increasing access to testing and treatment in many regions, but research is showing a possible risk of HIV bouncing back. On September 23rd, you can join us at the AIDS WALK that will mark the movement to end HIV and empower change for those living with HIV today.

If you would like to support the BC-CfE team walking in this year's AIDS WALK, please donate online here.