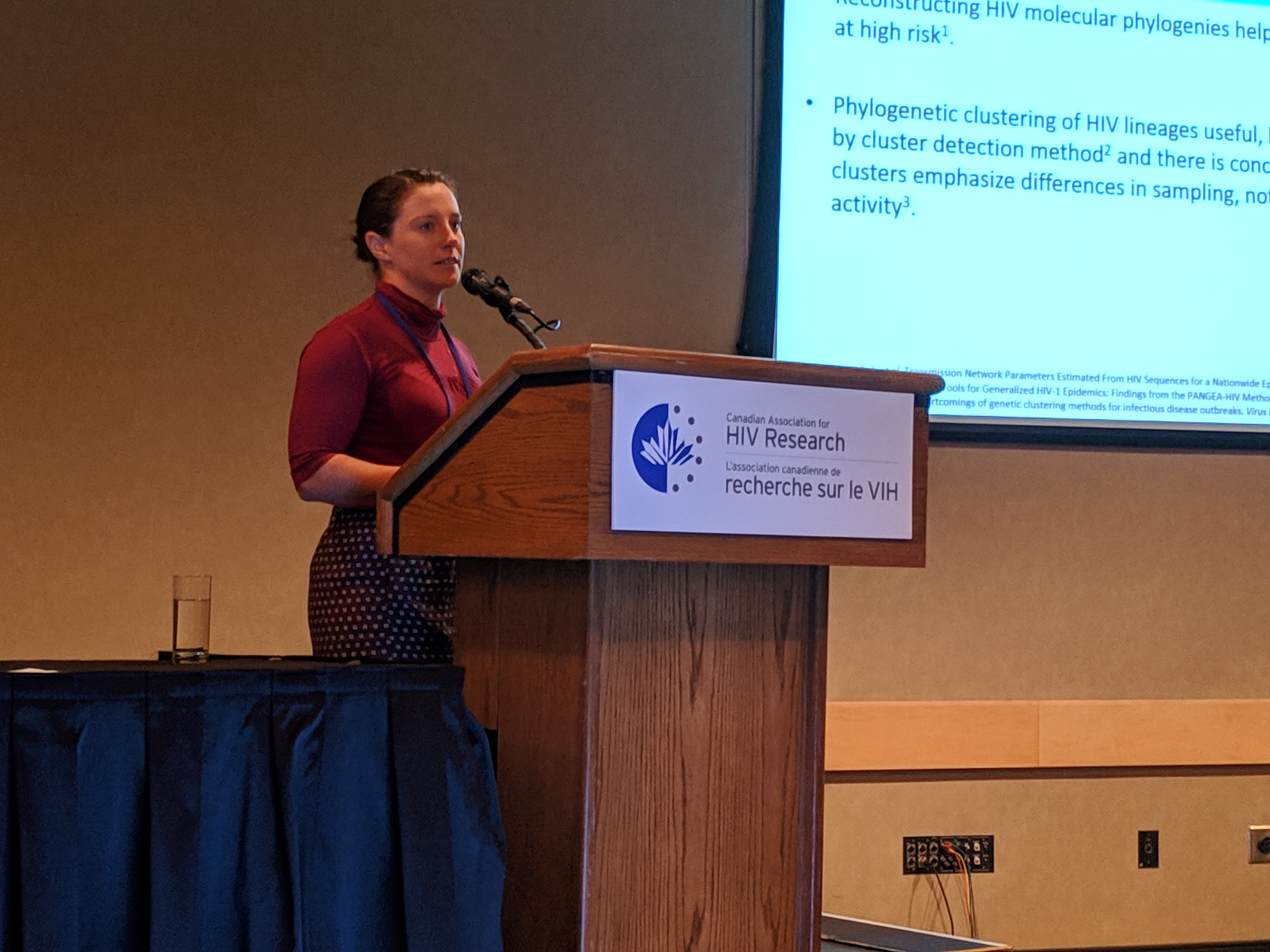 In addition to leading a number of ancillary events, researchers from the BC-CfE presented important findings at this year's CAHR Conference in Saskatoon—including several Peer Research Associates offering a community perspective. The 28th Annual Canadian Conference on HIV/AIDS Research is the premier gathering in Canada for those working in all disciplines of HIV/AIDS research, as well as policy makers, persons living with HIV and other individuals committed to ending the pandemic.

A full list of posters and presentations is available on our website. Listed below are just a few highlights of this year's exciting conference.

Dr. Taylor McLinden, CANOC’s Postdoctoral Fellow at the BC-CfE, presented an update on the largest longitudinal multi-province study of people with HIV on ART (antiretroviral therapy) in Canada. CANOC is comprised of over 11,000 participants and the study has enlisted people living with HIV on antiretroviral therapy between 2000–2016. In the future, the study will leverage CANOC’s large sample size, considerable duration of follow-up and geographic representation to generate novel evidence to improve the clinical care of people living with HIV.

“What’s Race Got To Do With It?”, by BC-CfE Research Coordinator Gbolahan Olarewaju, looks at symptoms of anxiety and depression in Indigenous gay, bisexual and men who have sex with men (gbMSM) and gbMSM of colour in urban areas of Vancouver, Toronto and Montreal. Preliminary findings from the multi-site Engage Study confirm gbMSM differentially experience mental health challenges, but additional quantitative and qualitative research may help clarify how intersectional factors may be contributing to ethno-racial differences. Engage is a five-year Canadian collaboration between researchers (including from the BC-CfE and community-based organizations on HIV and sexual health among gay, bi, and queer men, including trans men and other men who have sex with men (gbMSM) in Canada.

A cross-sectional analysis of women living with HIV in Canada amid growing awareness of the made-in-BC Treatment as Prevention strategy, presented by BC-CfE Research Coordinator Rebecca Gormley, finds even though many women living with HIV benefit from peer-led programs, few studies focus on peer leaders. The Undetectable=Untransmittable (UequalsU) campaign, based on principles of TasP. Within the context of the campaign, researchers assessed the prevalence of peer leadership engagement and whether it is associated with knowledge of HIV prevention benefits of an undetectable viral load with sustained ART, using survey data of 1,422 women living with HIV.

In Canada, approximately 80% of women living with HIV report experiencing violence in adulthood, according to research presented by BC-CfE Research Coordinator Rebecca Gormley and Peer Research Assistant Valerie Nicholson. Experiences of violence compromise mental health, impede engagement in HIV care and deter active participation in social and health advocacy. Support for women experiencing violence is critical, but little is known about factors associated with help-seeking among women living with HIV. Despite a high prevalence of violence among women with HIV in Canada, fewer than half seek support. Women who experienced mental health challenges, injection drug use, childhood violence and everyday sexism had higher odds of help-seeking, suggesting that women with co-occurring or syndemic health challenges may seek support for violence through existing support services. Care delivery models should incorporate trauma and violence aware care approaches.

Avenues for social connectivity are increasingly important for people living with HIV (PLWH). Previous research has not adequately evaluated how social support may improve clinical outcomes in addition to known psychosocial benefits, according to research presented by Tim Wesseling, a Peer Research Associate with the BC-CfE SHAPE Study. SHAPE investigates the relationship between social support and antiretroviral therapy (ART) treatment interruptions (TIs) among PLWH in BC. Among PLWH on ART in BC, social support is negatively associated with TIs. Since social support is integral to promoting social, emotional and physical well-being, findings suggest the importance of considering and evaluating interventions that foster social support for achieving optimal ART adherence in this setting. Future research must consider social support success factors among specific population groups.

Half of individuals living with HIV who are on treatment in BC are aged 50 or older. Similar trends are seen throughout North America. As BC-CfE Clinical Research Advisory Dr. Marianne Harris presented loneliness and stigma are common experiences for older adults with HIV and required and assessment of their impacts on cognition and emotional health. The associations between loneliness, stigma, cognition, and mental health are complex. While this analysis cannot sort out “causal” relationships, the results support that HIV-related stigma and loneliness both have negative consequences for cognition and emotional health. Interventions should be developed to engage people in socially meaningful activities and reduce consequences of stigma.

Congratulations to Jinny Choi who received CAHR’s New Investigator Award! At CAHR, Choi presented her work on “The impact of geographic location on HIV viral suppression and mortality among people who use injection drugs.” She also spoke to her work in knowledge translation and community engagement through Snack Chat. These low-barrier research chats are held regularly at Vancouver’s Dr. Peter Centre, in order to communicate research findings back to the community. A very well-deserved recognition of some great research initiatives!