Here's what happened at CROI 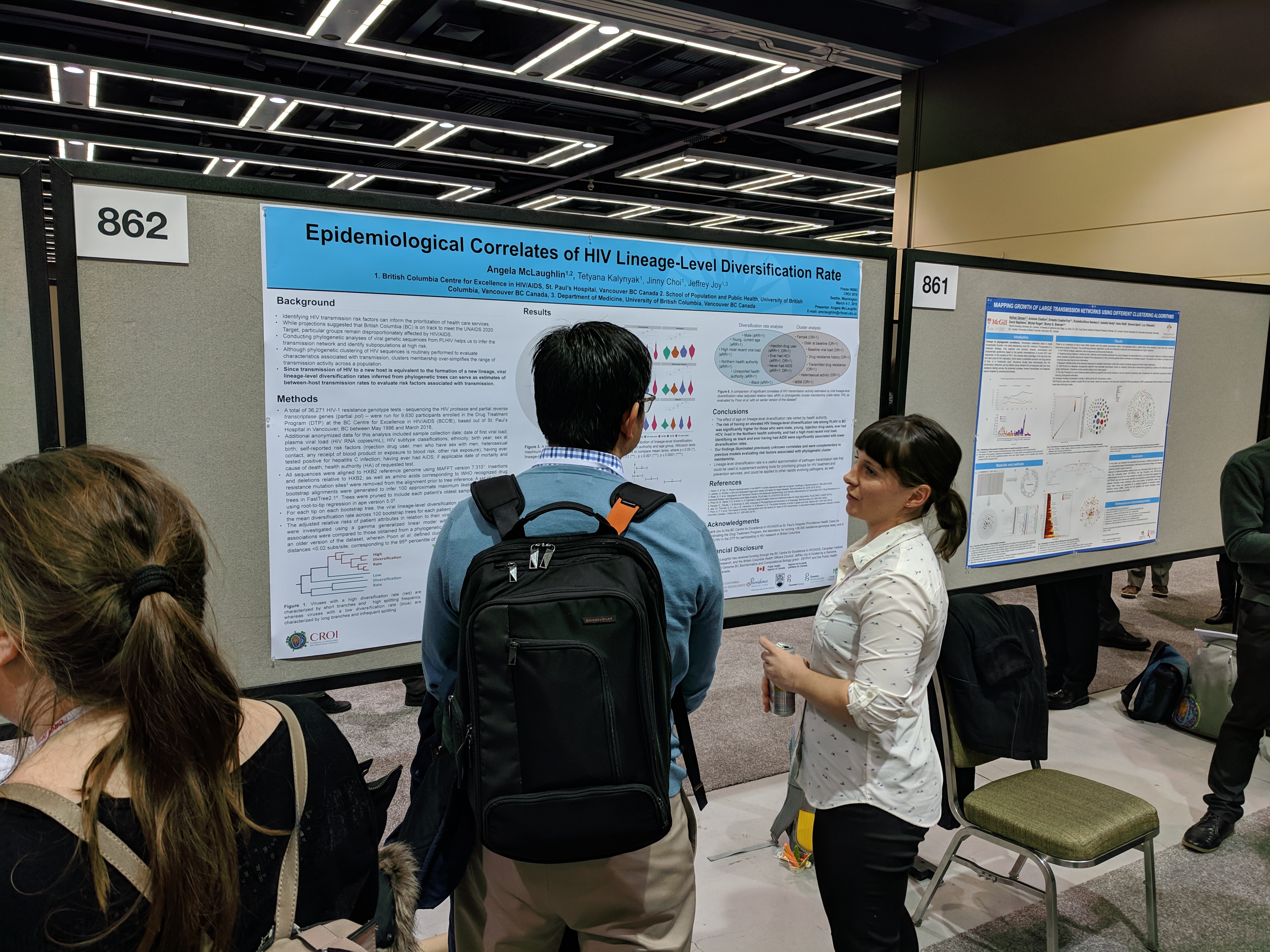 Top researchers from around the world gathered in Seattle last week to share the latest in the ongoing battle against HIV/AIDS and related infectious diseases.

The annual Conference on Retroviruses and Opportunistic Infections (CROI) is a pre-eminent HIV research meeting and attracts more than 4,000 HIV/AIDS research leaders. Among them were scientists from the BC-CfE, who presented research on PrEP, HIV and aging, phylogenetics and more.

One significant study from the BC-CfE found no link between antiretroviral treatment for HIV and osteoporosis-related fractures, offering a counterpoint to concerns the HIV treatment tenofovir increases the likelihood of bone fractures. In fact, the research found earlier access to HIV treatment and healthy lifestyle habits may reduce the odds of fractures.

Highlighting the ongoing success of the made-in-BC Treatment as Preventionstrategy, the BC-CfE provided data demonstrating a strong uptake of HIV pre-exposure prophylaxis (PrEP) following the launch of a publicly-funded program in BC. In the first year of the program more than 3,300 people were prescribed the preventative treatment for HIV by 550 prescribers province-wide, largely at-risk men who have sex with men living in urban areas.

Treatment as Prevention (TasP) was pioneered by the BC-CfE’s Dr. Julio Montaner and has been implemented in BC, leading to a consistent decline in new HIV cases in the province. The TasP model has also been implemented in many countries worldwide. The strategy is based on the proven concept of providing earlier access to HIV testing and immediate, universal access to sustained HIV treatment, thus resulting in improved quality of life for individuals living with HIV and, importantly, reduced new cases of HIV. It forms the foundation of the UNAIDS 90-90-90 Target to end AIDS globally by 2030. Mathematical modelling by the BC-CfE has shown that PrEP, combined with TasP, could advance progress towards ending AIDS as an epidemic.

Researchers from the BC-CfE presented work on a number of other issues related to HIV cure research and phylogenetic data. Meanwhile at the conference, University College London researchers announced that an HIV-positive man remains in HIV remission 19 months after receiving a bone marrow transplant from a CCR5 negative donor for Hodgkin’s lymphoma. This is the second case of a person being cleared of HIV after a bone-marrow transplant. The news made headlines around the world and was applauded by the scientific community.

While it’s too early to say this is a case of HIV cure, BC-CfE Executive Director and Physician-in-Chief Dr. Julio Montaner said it does provide some hope. “This encouraging advance has impressed on the scientific community the importance of continuing research in this area,” he said. “Meanwhile, in the absence of a vaccine or a cure for HIV, early, widespread access to testing and sustained treatment and care is the most effective means to curb HIV new infections. This is the concept supporting the proven successful Treatment as Prevention strategy.”

Check out the posters BC-CfE researchers presented at CROI.