Colleagues bid a fond farewell to the heart and soul of the BC-CfE, Senior Director Irene Day 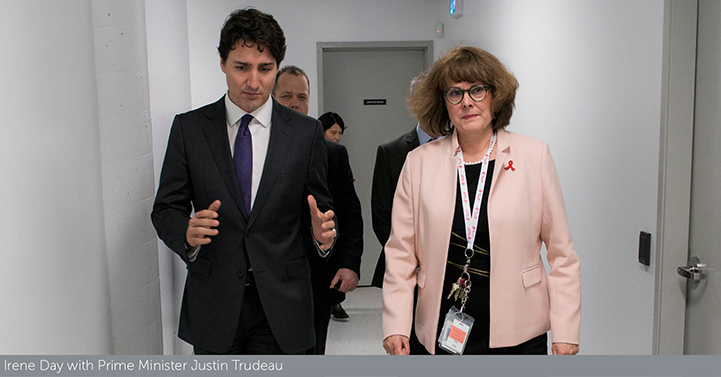 Many times you hear this and might think it is said in jest, but if you ever spoke with BC Centre for Excellence in HIV/AIDS (BC-CfE) Senior Director of Internal and External Relations and Strategic Development Irene Day, you would know that (most times) she really meant it. The Cape Breton native has devoted the past 15 years to moving the BC-CfE’s world leading research forward to every corner of the globe. She’s had a powerful impact on local, national, and international healthcare leaders alike with her quick wit, intelligence and passion for equitable healthcare. Because of this, it came as a shock to many this past February when the BC-CfE announced the March 31st retirement of one of its most passionate and trailblazing leaders.

From the Pope and the Prime Minister of Canada, to clients living in the Downtown Eastside battling co-morbidities and homelessness, Irene treated everyone she encountered with kindness, respect and compassion. Her office door always remained ajar for anyone who wanted to talk, share a joke or enjoy a cup of tea from Irene’s secret supply.

Speaking about her first time meeting Irene, the BC-CfE’s Director of Education, Dr. Silvia Guillemi said, “We went on a trip to Prince George together for work. We got into a random taxi together once we arrived- she was extremely friendly to the taxi driver, and I thought to myself, why is she so incredibly friendly, as she asked the taxi driver about his life story. I spoke to my colleagues later, they laughed and they agreed, ‘yes she is from Cape Breton. They are really friendly like that’.”

Irene had many stand-out achievements throughout her decade and a half building up the BC-CfE. Colleagues agree that one of Irene’s biggest legacies was her central role in advancing Treatment as Prevention (TasP) as an essential HIV care strategy for the province.

Dr. Bob Hogg, one of the BC-CfE’s key principal investigators reminisced, “She attended every event where the Premier of BC would be in attendance to speak to him about TasP and its life-saving impact, and the role of the BC-CfE. Julio then had the opportunity to speak to the Premier and at this point in 2013, it was then applied across the province. Since then, new HIV rates have never been lower, in part due to Irene’s tenacious attitude and exceptional grasp of government relations.”

Irene’s devotion to advancing research and care for marginalized populations knew no bounds. Her colleagues refer to her as the ‘embodiment’ of the BC-CfE’s mission. They would regularly observe her office lights were still turned on well into the early hours of the morning; midnight emails from Irene were not an uncommon occurrence. She moved the BC-CfE’s agenda from a local community organization to one which has reached and impacted the work of national health authorities across the globe- from China and Australia to Panama and France.

Beyond her leadership role in communicating the BC-CfE’s work, Irene also led the charge in procuring cost effective HIV medications, including antiretroviral and pre-exposure prophylaxis, which are a core component of the BC-CfE’s programs.

Irene’s role also involved working closely with the BC-CfE’s Executive Director and Physician-in-Chief Dr. Julio Montaner. He describes their dynamic as similar to the ‘Batman and Robin’ of the BC-CfE, in that she knew what he was thinking before he even spoke, “She has been a unique champion for the Centre in every possible aspect - whether it was engaging staff, her ambassadorial work with all levels of government and stakeholders or championing Treatment as Prevention, or 90-90-90; for all of this, I am tremendously grateful.

“From the first day Irene arrived at the BC-CfE, she understood the significance of the work that we do. Over the last 15 years, together we have moved the BC-CfE from being locally focused to truly global, without forgetting our local roots. This is largely thanks to Irene’s ability to drive our agenda, with great leadership and energy and in such a unique way. Irene will leave a huge vacuum here in the Centre. Her energy, her hard work, her mid-night and weekend calls, her political insights at every level, she developed such a complex role within the Centre across every possible dimension. It will take a lot of people, a lot of time, to fill this gap.”

Not satisfied with her significant role in moving HIV care forward in BC, Irene’s compassion and empathy went beyond the bounds of her role within the BC-CfE. In her spare time, she involved herself in a number of philanthropic programs for local and national NGOs and charities, including the Kidney Foundation, Heart & Stroke Foundation. She was also a founding member of the Canadian Cancer Society’s Diamond Ball fundraising gala.

This selflessness and dedication to lifting others up is at the heart of all she does. “Many people do not think about the BC-CfE without thinking about Irene. She has brought her incredible loyalty, thoughtfulness and dedication to the BC-CfE, which will be her biggest legacy in my eyes,” closed BC-CfE Research Scientist Dr. Kate Salters.

The staff and senior leadership at the BC-CfE and its partner organizations across the province would like to wish Irene the very best for her retirement where they hope she spends quality time with her husband Bob and her family. While we will work together to fill her fashionable heels, it will be near impossible to fill the part of the BC-CfE’s heart and soul she leaves behind.