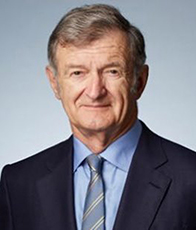 Terry Salman, a friend and long-time supporter of the BC-CfE, was recently named a member of the Order of Canada.

Created in 1967, the Order of Canada ranks among our country’s highest honours and is presented by the governor general. Salman was appointed for his contributions to mining exploration, and for his prodigious philanthropy and community activism.

Among his many community service activities, Salman spent eight years as chairman of St. Paul’s Hospital Foundation and is currently a member of the St. Paul’s Foundation Campaign Executive Committee.

As Chairman of the St Paul’s Hospital Foundation, Salman became a strong supporter of the work being done by the BC-CfE during a time of intense stigma surrounding people living with HIV/AIDS and the populations most affected by HIV/AIDS. Salman’s public support of the BC-CfE during the height of BC’s HIV/AIDS crisis is a testament to his vision, leadership and courage.

Salman was instrumental in the establishment of the first AIDS Research Endowment, a collaborative effort between St Paul’s Hospital and the University of British Columbia. This endowment played a pivotal role in the BC-CfE’s eventual development of highly active antiretroviral therapy (HAART), which revolutionized the treatment of HIV worldwide, enabling the suppression of viral loads to undetectable levels and providing a vastly improved quality of life and lifespan.

Salman’s support was also instrumental in the BC-CfE’s introduction of the concept of Treatment as Prevention and the eventual United Nations endorsement of the BC-CfE’s proposed 90-90-90 Target.

Further to this, Salman championed the implementation of the BC-CfE program that became known as “Seek and Treat to Optimally Prevent HIV & AIDS in BC” (STOP HIV/AIDS). Thanks to a meeting that he helped secure with BC’s then-premier Gordon Campbell, BC-CfE’s leadership was able to convince the provincial government that HAART could not only prevent progression of HIV infection to AIDS, and premature death, but HAART could also virtually stop HIV transmission and bring huge cost savings.

The success of the STOP HIV/AIDS program and the work of the BC-CfE has had a remarkable impact as the province, which once had Canada’s highest rates of HIV cases, has seen a 90% decrease in new AIDS cases, a 74% decrease in AIDS-related deaths and a 73% decrease in new HIV diagnoses. The BC-CfE congratulates Terry Salman on his well-deserved appointment to the Order of Canada.