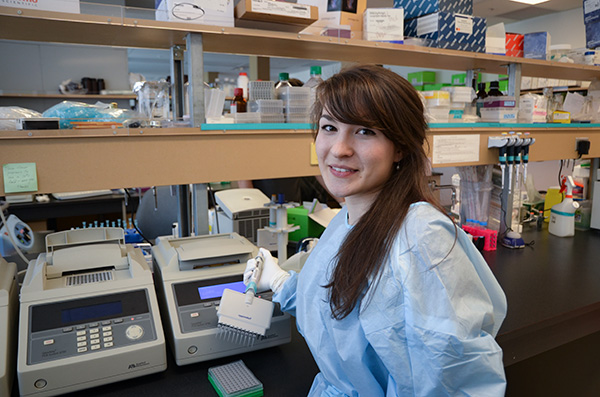 BC-CfE PhD scholar Natalie Kinloch has written a paper calling for further improvements to a 'game-changing' molecular method used to measure the size of the intact HIV reservoir, the typically tiny and hard to find portion of the HIV reservoir capable of “waking up” to infect new cells in the body. As an effective HIV cure will need to eliminate the intact HIV reservoir, methods to accurately measure it are of critical importance.

The new molecular assay, called the Intact Proviral DNA Assay (IPDA), was developed by leading HIV researchers at John Hopkins University and published last year in Nature. The IPDA requires less time, resources, and biological material than the previous gold standard reservoir measurement method, and therefore represented a major advance. It was developed to address the critical need for a precise and scalable method for intact HIV reservoir quantification and it is now being adopted in research and clinical studies.

Kinloch’s as-yet-unpublished research, which was undertaken in partnership with Weill Cornell University in New York and which represents the results of a large pan-North American collaboration to apply the IPDA assay more broadly, confirms the method as highly valuable. However, Kinloch demonstrates that naturally-occurring HIV genetic variation causes the assay to fail in a substantial number of cases, up to 28 percent, and in other cases to underestimate reservoir size. While cases of complete assay failure are obvious to detect, cases where the assay underestimates HIV reservoir size are far more difficult to recognize . Critically, Kinloch shows that these assay limitations could negatively impact results interpretation in clinical trials for an HIV cure, and proposes some solutions to these problems.

Kinloch and colleagues conclude that while the IPDA represents an important methodological advance, the impact of HIV’s genetic diversity on this assay should be addressed before the IPDA’s widespread adoption, particularly in clinical trials that evaluate HIV remission or cure strategies . She underscores the need for collaborative efforts across the field to further refine this new test.