The 11th International AIDS Society (IAS) Conference on HIV Science took place from July 18th to the 21st and BC-CfE researchers attending the virtual conference used the opportunity to present their latest findings. 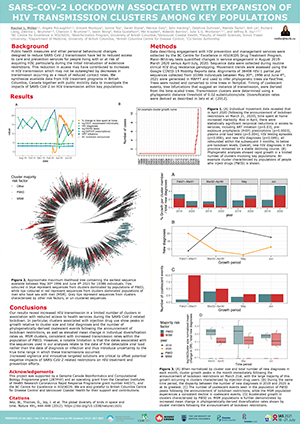 BC-CfE Graduate Student Rachel Miller’s poster presentation “SARS-CoV-2 Lockdown Associated with Expansion of HIV Transmission Clusters Among Key Populations” was awarded the IAS and Merck Sharpe & Dohme Prize for Operational and Implementation Research in Differentiated Service Delivery. The results of her work suggest increased HIV transmission in a limited number of clusters, particularly those characterized by people who inject drugs, in association with reduced access to health services during the SARS-CoV-2-related lockdown. Increased vigilance and innovative targeted solutions are critical to offset potential negative impacts of SARS-CoV-2 related restrictions on HIV treatment and prevention efforts. 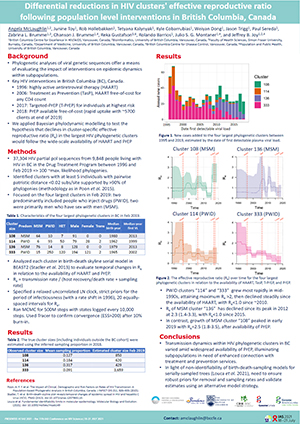 Research Assistant Angela McLaughlin with the BC-CfE Laboratory Program presented her poster “Differential reductions in HIV clusters' effective reproductive number following population level interventions in British Columbia, Canada” which leveraged HIV genetic sequence data available through the Drug Treatment Program to model the growth of the largest HIV phylogenetic clusters in BC in response to the wide-scale availability of HAART and PrEP. Although we expected that all the clusters would have a reduced reproductive ratio (Re) over time, coincident with reduced HIV incidence overall, we found that there were differential reductions in cluster-specific Re following availability of PrEP in 2018 for the two largest MSM clusters - one MSM cluster has exhibited a declining Re below 1 since 2012, whereas the other focal MSM cluster exhibited rapid expansion in early 2019 with Re=2.5 (1.8-3.5), following the widespread availability of PrEP. By inferring the variability of transmission dynamics within HIV clusters amid widespread availability of PrEP, we have helped to illuminate subpopulations in need of enhanced connection with treatment and prevention services. 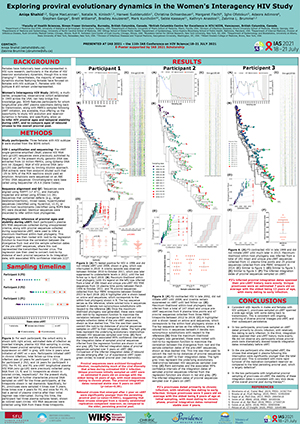 Graduate Student Research Assistant Aniqa Shahid’s poster “Exploring proviral evolutionary dynamics in the Women's Interagency HIV Study” explored latent HIV reservoirs in females. Despite the success of antiretroviral therapy to treat HIV, these medications are not curative and need to be taken for life. This is because HIV integrates its genetic material into the genome of the infected human cells, and can persist in a dormant or "latent" state for many years. To cure HIV therefore, scientists will need to develop strategies to eliminate the latent reservoir. Towards this goal, substantial efforts are being made to understand reservoir characteristics, composition, and longevity in individuals living with HIV whose infections are well-controlled with antiretroviral therapy. However, most participants of such research studies, particularly in North America, have been males. By contrast, females, who make up ~52% of people living with HIV worldwide, are underrepresented in HIV latency research.

Although this is now changing, the majority of HIV reservoir dynamics studies published in the recent years have focused on females with HIV subtype C. Females with HIV subtype B still remain underrepresented. We studied female seroconverters from the Women's Interagency HIV study. Our results are consistent with reports in males and females with HIV subtype C, and confirm that proviruses sampled on-cART spanned a wide age range, with some dating back to transmission. This is consistent with ongoing archiving of diverse proviral lineages pre-cART, and their subsequent persistence. Our research will further help understand latent HIV reservoir dynamics in females, towards the ultimate goal of developing a cure for HIV that will be effective in, and accessible by, all.

Ditha Nanditha a Graduate Research Assistant with the BC-CfE’s EMBARC (Epidemiological, Mathematical and Biostatistical analysis and Research Collaboration in HIV/AIDS) Team presented her poster “Accelerating progress towards the United Nations' 90-90-90 target: the impact of a province-wide HIV Treatment-as-Prevention-based initiative in British Columbia, Canada”. In the present U=U era, a shortened time to achieve suppression is a critical measure of HIV care success. Controlling for confounders including changes in ART eligibility and first-line ART preferences, STOP HIV/AIDS, a TasP-based intervention, was associated with a 65% shorter in time from HIV diagnosis to ART initiation and a 22% shorter in time from ART initiation to first virologic suppression

These findings offer empirical evidence of the impact of a TasP-based intervention in optimizing the HIV care continuum and accelerating the progress towards the UNAIDS’ 90-90-90 target. These findings further support the continued expansion of sustainable and equitable TasP-based policies and programmatic efforts, targeting underserved populations, as key tools to further reduce AIDS-related morbidity and mortality, as well as HIV transmission, and thus alleviate the overall global burden of HIV/AIDS